Taking a Whack at Donald Trump: The Piñata

Can you tell which one is the idiotic blowhard? 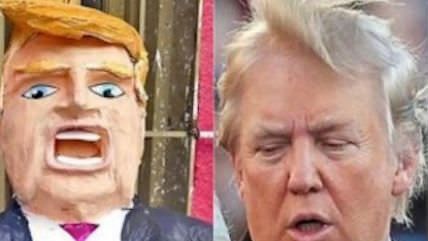 Earlier this week, I noted that Donald Trump, the soon-to-be ex-presidential candidate doesn't know what he is talking about when it comes to crime and Mexican immigrants. Now some enterprising folks in Mexico have constructed a life-sized piñata of the blowhard billionaire. Usually such festive effigies are filled with candies that spill out when blindfolded children whack them with sticks. When you strike the Trump piñata, bullshit spews out (OK, I made that up).

"One hundred years ago, when Irish immigrants were coming to America, my grandmother among them, they were too often characterized as "drunks." A few years later it was the Italian immigrants, my grandfather among them, who were called "mobsters" or worse, "dagos." This type of divisive rhetoric is just wrong. It was wrong 100 years ago and it's wrong today," Pataki wrote in the letter, which included a "cc" to Trump himself.

"Yet here we are in 2015 and a leading candidate for the GOP nomination for president is calling Mexicans criminals, rapists and drug dealers," the letter states. "This is unacceptable."

Note to Republican candidates: Denouncing Trump for this particular stupidity is a good idea if you actually hope to win the 2016 election.