Cops took the kid to the precinct, rather than her house. 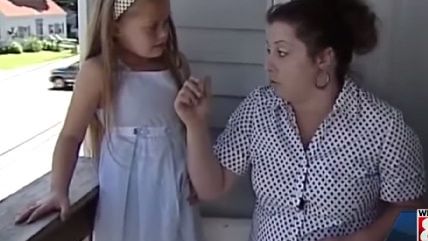 A 7-year-old in Westbrook, Maine, was playing at the park within eyesight of her family's house. Someone called 911 (of course) and the police swooped in. They took the girl to the precinct because, as this WMTW reporter notes, "Mom wasn't watching."

What? Mom didn't devote her afternoon to sitting at the side of the park and watching her child's every move?  Tsk, tsk. The child was on her own for about an hour, and as Police Chief Janine Roberts told the reporter, "That's a long time for a 7-year-old girl to be by herself any place, let alone a park."

Yes, the park is certainly the last place you'd ever want to see a kid hanging out. What kind of crazy mom would let her child go there?

The mother's name is Nicole Jensen. She stressed that her kids check in with her every hour, and the park is usually filled with other parents, who take turns watching each other's children.

Jensen has been charged with child endangerment.

Roberts was glad that the officers were able to "reunite" the mother and child—as if they had endured Hurricane Katrina, or something. She also thanked her department for having all the necessary "resources and facilities" to save this kid, even though the officers could have literally walked the girl across the street to her house if they were so concerned.

Let's hope Jensen has learned her lesson:  Parks aren't for kids! They're for real estate values. They're props. You're not supposed to let your kids actually, you know, play, in them.

If you watch to the end of the video, the reporter, David Charns, notes that the little girl and her brother are headed straight back to the park.

The little recidivists! Will they never learn?