The 2016 Candidates on the Charleston AME Church Shooting

This is relevant to my issues because... 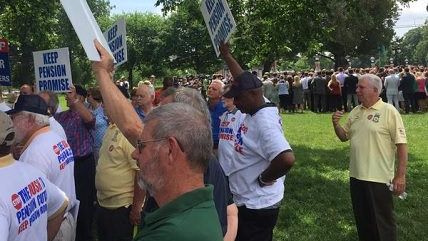 The media wants answers about the mass shooting at the Emanuel AME Church in Charleston, S.C., from the 2016 presidential candidates, especially the Republican ones.

Jeb Bush commented on the shooting at the Faith and Freedom Coalition summit. Via Talking Points Memo:

Bush went on to meditate on the fact that the massacre—which resulted in the deaths of nine African-Americans including South Carolina state Sen. Clementa Pinckney (D), pastor at the Emanuel African Methodist Episcopal Church—took place in a house of worship.

"They were praying. They were learning and studying the word of the Lord," Bush said. "In times like these, in times of great of national mourning, people of faith, all of us must come together and at least reflect on this and fortify our strength and love of Christ, love of God to be able to continue to go forth."

Huffington Post political reporter Laura Bassett breathlessly reports Bush said he didn't know if the shooting, perpetrated by a white man who reportedly confessed he wanted to start a race war, was racially motivated. He said it "looked like it was" when she pressed him.

At the same Faith and Freedom summit, Paul drew the connection between the shooting and the loss of Christian faith more explicitly, saying that mass shootings were indicative of a "sickness" in the culture that could only be cured by salvation.

The legacy candidate on the Democratic side, Hillary Clinton, didn't do much better, also seeming to ignore the racial motivations to instead pin her sectarian policy goals to the tragedy. Unsurprisingly, she seems to be getting away with it better. Her comments, via Time:

"How many people do we need to see cut down before we act?" she asked, during a summit of elected and appointed Latino politicians meeting in Las Vegas.

She began by saying that her thoughts and prayers were with the victims and their families in the shooting, before turning to a broader discussion of police. "So as we mourn and as our hearts break a little more, and as we send this message of solidarity that we will not forsake those who have been victimized by gun violence, this time we have to find answers together," Clinton said.

It gets worse. Sen. Bernie Sanders (I-Vt.), running for the Democratic nomination pretty much exclusively on a platform of economic illiteracy, said the incident was a reminder of the country's "ugly stain of racism," but held a loud rally on the Capitol lawn, within shouting distance of a vigil being held for the shooting yesterday. The rally was about pensions.

Lincoln Chafee, a former Republican Senator running for the Democratic nomination, took credit for hate crime legislation he supported that is now supposed to send federal money to Charleston, S.C. His comment, via the New York Daily News:

My heart goes out to the Charleston community and to the victims of these horrifying murders. It is comforting to know that Charleston is fortunate to have an expert and able mayor in Joe Riley. Hate crime legislation I supported while I was in the Senate will give the community federal funding to assist in this difficult time.

Republican presidential candidate Ben Carson warned about "hate," and not just the racial kind. He wrote on Facebook:

I pray for the community scared and hurting. I also pray you and I can conquer hatred.

In my lifetime I have seen such great progress. Though racial based hate is still very much alive as last night so violently reminded us.

But I worry about a new hate that is growing in our great nation. I fear our intolerance of one another is the new battle ground of evil. Today many feel it is ok to hate someone who thinks differently than you do.

The left hates the right. The right hates the left. This attitude is poison. Poison that will sicken all of us.

In an interview on AM radio, Rick Santorum, another Republican presidential candidate, called the shooting an obvious "crime of hate," and stressed the importance of prayer when there are "assaults on our religious liberty we've never seen before," working his campaign theme into the discussion about the shooting. Ted Cruz said he had faith in law enforcement doing their job and catching the shooter. Dylann Roof was apprehended in North Carolina and confessed to the shooting, saying he wanted to start a race war.

"I bet there were some indicators early on that this guy was not quite there. Just being able to track people—put them into systems where they can be deterred or stopped. But it's very complicated in a nation of 300 million people where you have freedom of movement and freedom of thought. 300 million of us and unfortunately every now and then, something like this happens. And we'll see."

Most of the other candidates stuck to boiler-plate condolences, perhaps trying for once to stay off the media radar.