Some senators, tellingly, see listening to Americans' surveillance concerns as a bad thing. 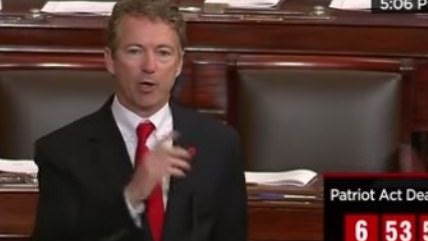 Sen. Rand Paul's moves to help force Section 215 of the PATRIOT Act to sunset and his concerns about the quality of its replacement, the USA Freedom Act, have won him criticism from several different quarters. There are those fear-mongering pro-security-state establishment politicians who want to keep everything the same, even though they actually can't. Senators like Mitch McConnell, (R-Ky.), Dan Coats (R-Ind.) and John McCain (R-Ariz.) made it clear in their comments during yesterday's voting maneuvers that they'd like to keep Section 215, but they never made any efforts to engage the reality that the Second Circuit Court declared that Section 215 never actually authorized the kind of mass phone and Internet metadata collection targeting Americans the National Security Agency (NSA) claimed it did.

Paul's maneuvers have also frustrated some who see him potentially blocking actual reform of surveillance in his insistence on tearing down anything targeting Americans for warrantless data collection. Last night he again raised the specter of the NSA using the USA Freedom Act to continue collecting phone records by using the names of phone companies as selection terms. The Freedom Act, though, forbids using telecom or Internet companies as selection terms unless the companies themselves are a focus of investigations. Cato Fellow (and former Reason editor) Julian Sanchez explains further why the USA Freedom Act has some really important provisions, even if it doesn't drive the stake into the heart of warrantless domestic surveillance, here at Vice's Motherboard.

But the strangest criticism coming out of Paul's actions has to be that it's all to raise money for his presidential campaign. Here's crotchety McCain complaining to Politico that Paul just didn't want to sit down with him at a meeting after essentially calling him a liar:

Sen. John McCain (R-Ariz.) noted that Paul has missed "a number of meetings" Republicans have held on the PATRIOT Act in recent weeks. He contended there was an obvious political reason for Paul's stance, pointing out how his colleague was tweeting supporters taking "selfies" of themselves next to Paul speaking on TV.

"I know what this is about — I think it's very clear – this is, to some degree, a fundraising exercise," McCain said Sunday. "He obviously has a higher priority for his fundraising and political ambitions than for the security of the nation."

McCain was very much a sore loser last night. He tried to lecture Paul over procedural matters last night when and tried to block him from giving his five-minute broadside against the PATRIOT Act. But McCain failed and Paul had his say.

"At a time when the threat of terrorist attacks at home and abroad is higher than ever, it's unconscionable that these national security tools can no longer be used, particularly since the reason is to advance the political ambitions of one person," Feinstein said in a statement.

First, it's rather remarkable that senators are accusing Paul of misleading people and then acting like the NSA doesn't have several other surveillance tools to track down terrorists. Section 215 has been shown to have not been a player in actually stopping terrorist plots. One of the other expiring provisions, the so-called "lone wolf' provision that authorizes surveillance of non-affiliated foreign terror suspects, has never even been used. The third provision, for roving wiretaps, is more likely to be used in drug or spy cases, not tracking terrorists, officials say. As Sanchez notes in his Motherboard piece, there's all sorts of other forms of surveillance going on and won't be going away.

But second, it's additionally remarkable that Paul is essentially being attacked for responding to Americans' concerns about their right to privacy and may be rewarded with money for his presidential run by doing so. Recent polls have made it absolutely clear that Americans are very concerned about NSA domestic surveillance and did not want the PATRIOT Act just blindly renewed. If Americans are throwing money at Paul for taking this stand, then maybe there's a good reason? But no, these senators want to treat the American public as though Paul is duping them, while at the exact same time attempting to mislead us all about the effectiveness of these surveillance tools in actually fighting terrorism.

Here's Mike Huckabee actually complaining on Fox News that Paul is actually trying to shape policy as a senator instead of shaking hands and kissing babies:

In response to a question about Paul, Huckabee said on Fox News Monday morning that 2016 contenders must "decide what they want to be when they grow up."

Those in government positions owe a responsibility to the taxpayer, he continued.

"If you want a different job, then say I don't want this one anymore. I'm bored with it," he said. "But be honest about it and go out and give the taxpayers a break, and let them have someone on the job full time."

I don't even know exactly how to parse this criticism. It almost feels like the opposite of McCain's complaining. Paul should stop trying to accomplish things and run for president and just talk about the things he wants to accomplish because taxpayers! Stop getting things, done, Paul! Don't you see you've got a campaign to run! How on earth will you get publicity for your presidential campaign if you spend all your time shaping policy!