Rand Paul: Blame 'Hawks in Our Party' for Creating ISIS 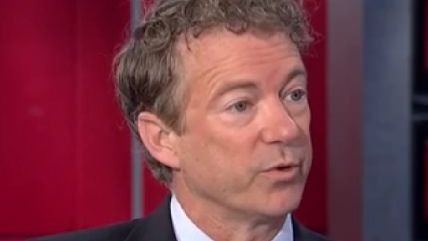 On MSNBC's Morning Joe on Wednesday, Joe Scarborough asked Sen. Rand Paul to respond to Sen. Lindsey Graham's contention that a restrained U.S. foreign policy has aided and abetted ISIS. Paul turned the question on its head, laying the blame for ISIS at the feet of Republican and Democratic war hawks:

ISIS exists and grew stronger because of the hawks in our party who gave arms indiscriminately and most of those arms were snatched up by ISIS. These hawks also wanted to bomb Assad which would have made ISIS's job even easier. They created these people. ISIS is all over Libya because the same hawks in my party loved Hillary Clinton's war in Libya, they just wanted more of it. But Libya is a failed state and a disaster, Iraq really is a failed state or a vassal state now of Iran, so everything they've talked about in foreign policy they've been wrong about for 20 years and yet they somehow have the gall to keeping saying and pointing figures otherwise.

It's a great clip. Paul is at his best when he's pointing out the absurdities of the neoconservative line on Iraq, ISIS, Syria, and Libya.

Nevertheless, New Jersey Gov. Chris Christie echoed some of Graham's criticisms of Paul during a Fox and Friends appearance on Wednesday, according to Politico:

The Republican presidential hopeful blasted the likes of Lee and Paul for supporting viewpoints similar to those of Edward Snowden, who Paul called a criminal.

"He's a criminal and he's hiding in Russia, and he's lecturing to us about the evils of authoritarian government while he lives under the protective umbrella of Vladimir Putin?" Christie asked. "That's who Mike Lee and Rand Paul are siding with? With Edward Snowden? Hey, come on."

The governor also blasted President Barack Obama's strategy in the Middle East, with particular emphasis on the Islamic State and Bashar Assad's regime in Syria.

"If a President Christie had drawn a red line in Syria," he said, the United States would have taken out Assad as promised.

Graham is likely to join the 2016 GOP race, and Christie might as well. There will be no shortage of Republican candidates making the ridiculous argument that things would be better in the Middle East if only the U.S. would commit even more resources in service of ill-defined goals and untrustworthy allies. Paul should keep calling them out, and remain unflinching in his counter-criticism. While public opinion remains supportive of some kind of military action against ISIS (as does Paul), more people than ever now admit the Iraq War was a costly error. That goes for antiwar liberals, disillusioned independents, and even conservative Republican primary voters. A successful Paul presidential campaign needs to court all these people, and distinguishing himself from the insanity of Christie and Graham is a great way for Paul to do that.