Future of Section 215 of PATRIOT Act completely up in the air. 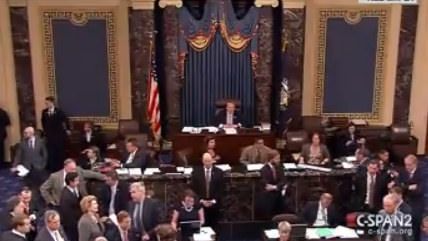 Senate Majority Leader Mitch McConnell (R-Ky.) was right. The Senate did not have enough votes to pass the USA Freedom Act, the compromise law that would have restrained, but not eliminated, mass data collection by the National Security Agency (NSA). The vote was 57-42 late this evening (technically early this morning), just three votes shy.

But Sen. McConnell didn't get his way, either. There were even fewer votes in favor of extending Section 215, which has been used to justify the controversial bulk metadata collection of records of Americans, for another two months.  That one failed 45-54. McConnell voted against his own proposal once he realized he was losing. That maneuver will allow him to bring it back up for reconsideration.

For his part, Paul said what he wants is for the USA Freedom Act to be debated in the Senate and amendments permitted to make it stronger. He had said he wanted up to six amendments but was willing to compromise with two.

McConnell has responded by calling the Senate back into session on May 31 to see if they can get something passed.

So, as it stands, Paul is winning this fight. But we'll have to see what happens in a week.