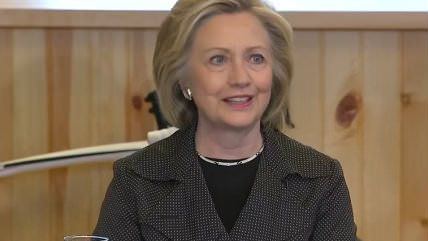 A small but perhaps telling detail from a Bloomberg Politics/Purple Strategies focus group of 10 Iowa Democrats: They all profess to liking all-but-certain Democratic presidential nominee Hillary Clinton, and a couple of them even say that they like her record, her policies, and her ability to get things done.

Yet when asked to name Clinton's specific accomplishments as Secretary of State, nothing really comes to mind.

Here's what two of the group's participants said when asked how they felt generally about Clinton as a leader and a person:

"She's not perfect," said Charlie, 24, a graphic designer. "She's been in the eye for a long time, in the public's eye, and you're going to have some stuff on her. But she has great policies and she knows how to get stuff done."

"There's definitely some trust issues there," added Bill, 55, a chef. "But like everybody else has said, her record pretty much speaks for itself. She is eminently qualified to run this country, and I think she'd probably do a pretty good job."

So Clinton's "record speaks for itself." And what record would that be? The question is put to the group, and yet…

While the group agreed that Clinton possessed the experience and policy positions required to be elected president, the participants were less confident when it came to naming the former secretary of state's actual accomplishments.

"I really can't name anything off the top of my head," said Ryan, the event planner.

Following a brief silence, a 22-year-old student named Amanda added, "I honestly can't say I followed along [with] everything that was going on."

A video of the exchange features a few more responses—but no one really manages to come up with an actual accomplishment. Which is fair enough, I suppose, given that when Clinton herself has been asked about her accomplishments at State she has generally responded with vague, roundabout answers like, "I think we really restored American leadership, in the best sense." Is there a worst sense?

Granted, Hillary Clinton isn't exactly running on her record of specific diplomatic accomplishments. Instead, to the extent that she is running on what she has already done rather than what she intends to do, she's running her record of having held various positions of political power (Senator, Secretary of State) and her status as the most prominent politically active Democrat in the nation who is not currently occupying the White House. It is a record of being more than a record of doing, but as the focus group suggests, for many Democratic voters, that may be enough.