"Dear Mr. President. There are too many states nowadays. Please eliminate three." 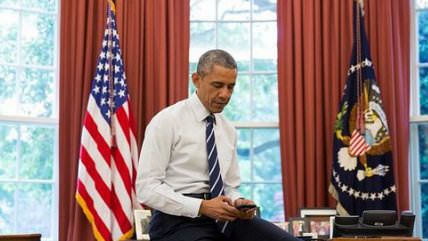 President Obama joined Twitter yesterday. Though many people assumed long-running account @BarackObama was actually the president—it's Twitter verified, after all—that handle is run, with his approval, by the nonprofit Organizing for Action. Obama himself will now purportedly be tweeting from @POTUS. Here's his first tweet:

In 24 hours, the account has amassed 1.86 million followers and @POTUS has tweeted twice more: a photo of Obama visiting police in Camden, New Jersey, and a jokey reply to Bill Clinton. Behold the world we now live in, my friends:

Just two dudes, chumming it up on Twitter! The "presidents: they're just like us!" aesthetic of it all creates a strange illusion of intimacy. Obama and Clinton are (like most of us on social media, to some extent) practically begging others to develop parasocial relationships. And if Twitter is particularly good at fostering these sorts of connections, it also, like the Internet more generally, invites another sort of mass delusion:

It is the great democratizer; the global water cooler; the one place where you can say anything to anyone and know it'll be okay.

That's Caitlin Dewey at The Washington Post, who scoffs at such naivety:

On the modern Internet, impressions of anonymity and ephemerality are, well … usually fake.

Case in point? After Barack Obama belatedly joined Twitter on Monday — in his official, presidential capacity — dozens of Twitter denizens began tweeting him sex jokes, threats and other unprintable inanities. (We counted nearly 500 tweets dropping f-bombs at POTUS in the past day.)

But the joke's actually on them: Not only does the Secret Service alreadymonitor Twitter for threats, but the White House is archiving each and every thing @POTUS tweeters say.

The @POTUS Twitter bio states this plainly: "Tweets may be archived: http://wh.gov/privacy." But that hasn't stopped the folks of Twitter from going to town @POTUS anyway. Will they come to regret it? Only time will tell. For now, let's just enjoy the kinds of things people feel compelled to tweet at the president…

@potus @bloomberg Hey #Satan, its me JOHN IN MEXICO. Lets stay in touch, shall we? I am easy to find. You are 2, in #lakeoffire.

Hey @POTUS do you have any concerns about the Blonde across the narrow sea? She has dragons they say. #draghazi

@POTUS ur the greatest feminist besides mulan and Beyonce fam…. bless u for blocking the meninist

I respect the office of @POTUS not the man currently occupying it. #Liberty, #InGodWeTrust, #ePluribusUnum

@POTUS do not talk to me Satan

.@POTUS fuck me in the ass

@POTUS I have been trying to reach you for 2 yrs. "God has spoken" UFOS & Aliens are real. http://t.co/DaxEPi8wtc

@POTUS NO ONE GIVES A SHIT

@bigblueonyou @VLADDO @POTUS I'm born in 66 am I a hipster ? If so fuck off my location is n while pages come get me ass hole

.@POTUS Dear Mr. President. There are too many states nowadays. Please eliminate three. P.S. I am not a crackpot

Hey @POTUS fancy a cheeky nandos with the boys?

Dear @POTUS: What is your favorite flavor of Pringles? I like the barbecue but the pizza chips are good too. Sincerely, @notjessewalker