Conversely: We are safe, so some things matter. 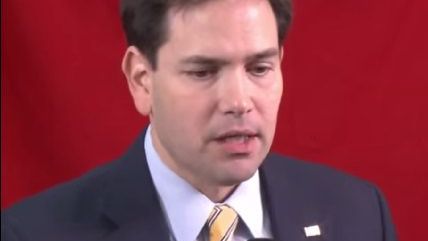 What matters? Nothing matters.

As video footage of Rubio further clarifies, "the economic stuff"—as he blithely calls it—won't matter at all unless we deal with threats to our national security. "The world has never been more dangerous than it is today," the website claims.

This statement is objectively incorrect; the world has never been safer, according to Harvard University's Steven Pinker. The Cato Institute's Christopher Preble explains:

In his magisterial study of the decline in violence worldwide, Harvard's Steven Pinker posits that "we may be living in the most peaceable era in our species' existence," even as he concedes that most people don't believe it.

To be sure, Rubio's claim that the world "has never been more dangerous than it is today" is not just wrong but insanely wrong. How about when a massive communist empire threatened us with nuclear annihilation? Or when Nazi Germany and Imperial Japan launched a war of extermination? Or when the Mongols amassed the largest land conquest in human history and left behind smoking ruins and pyramids of skulls?

Even if Rubio were right—and he's not—his approach would not make the U.S. a safer country. No one who refuses to admit that the Iraq War was a grave mistake should be trusted to handle these matters. But again: He's not right.

Still, we should take him at his (ridiculous) word. If elected, Rubio would prioritize his neoconservative foreign policy agenda over "the economic stuff"—trifling matters like runaway government spending, a broken healthcare system, unemployment, the debt, etc. Citizens should expect further encroachments on their civil liberties, because civil liberties don't matter. Nothing matters if we aren't safe, remember?

Sky-is-falling rhetoric about our uniquely dangerous world is alarmist by design, but in this case, it worked. I'm legitimately alarmed—not about national security, but about losing my constitutional rights under a Rubio administration.