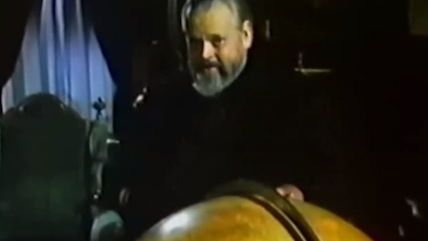 Wednesday was Orson Welles' 100th birthday, and that's as good an excuse as any to look back at his work. But this post won't be highlighting any of the man's masterpieces. In keeping with the Friday A/V Club's interest in pop detritus and paranoia, we'll watch a trio of crazy documentaries he narrated near the end of his life, when he was basically taking any job he could to help fund his independent pictures. All three of these quick-payday projects shine a light on the apocalyptic mindscape of the 1970s, each from a different angle.

The first is Alexander Grasshoff's Future Shock, a 1972 film based on Alvin and Heidi Toffler's book of the same name. (Heidi's name does not appear on the cover, but Alvin later acknowledged her role as his collaborator.) I've never read Future Shock, so I don't know whether the book is as terrified of tomorrow as the movie is. The two Toffler tomes that I have read are rather welcoming of the future, but those were written later and the authors' thinking may have evolved. The documentary, at any rate, strikes a rather reactionary tone: It's a movie for people who panic over seeing so many supermarket choices, who think a heart transplant is a sign of the "disposable" society, and who react to body modification by asking the question, "What happens to race?"

If nothing else, check out the beginning. Welles recites a portentous intro on an airport's moving sidewalk, and then we see him in the back seat of a car, where he looks through his briefcase and smokes a cigar while cop-show music plays on the soundtrack.

Welles followed the secular Future Shock with a Christian film, Robert Amram's The Late Great Planet Earth. Based on Hal Lindsey's bestseller—published, like the Tofflers' book, in 1970—the 1979 movie presents Lindsey's belief that the Biblical endtimes are upon us, and it works hard to connect events in the Middle East to the prophecies in the Book of Revelation. "As the world staggers from one crisis to another," Lindsey tells the camera, "I believe that we're racing on a countdown to the end of history as we know it."

But that's not all that's in the movie. Welles raises all kinds of apocalyptic subjects, from famine to nuclear war, from cults to killer bees. A fellow from the Club of Rome shows up. Paul Ehrlich talks about overpopulation. Several scientists, including Norman Borlaug, discuss the idea of civilization ending—or just point out, as Desmond Morris does, that humanity is going to go extinct someday. None of them mention the New Testament, and I doubt that any of them knew what sort of movie they were being interviewed for.

The high point comes a little after the hour mark, when the talk turns to the Antichrist. The film cuts between Lindsey citing the Bible to say a world dictator is coming and poor Robert Nisbet (!) discussing fascism, while the camera shows a sequence of political leaders, from Ted Kennedy to Ronald Reagan. If you watch just one part of the picture, make it that one:

The author of the film's press kit later claimed that the documentary had been tongue-in-cheek and that his PR materials had been "equally facetious." It's extremely unlikely that Welles took the film seriously, and it's certainly possible that Amram saw the project as a camouflagued mockumentary, something comparable to Luis Buñuel's Land without Bread or Les Blanc's Chicken Real. But commercially speaking, the movie was aimed at an audience of potential believers. More than 35 million people have bought Lindsey's book, and most of them took it very seriously.

From the secular Future Shock and the Christian Late Great Planet Earth we move to a '70s apocalypse from the New Age sector, Robert Guenette's The Man Who Saw Tomorrow. Released in the first month of 1981—hey, it's the Long Seventies—this is a picture about the prophecies of Nostradamus. It's the one movie of the three that I saw not long after its release; it kept turning up on TV, and it inspired a lot of playground conversations back in the day. I highly recommend the dramatization of a nuclear war that begins at the 1:10:23 mark, especially the part when Welles' voice takes on an oh-so-serious tone and identifies the Islamo-Russian missiles' target: "Experts agree that that could only mean…New York."

The world hasn't ended for everyone yet, but for Orson Welles the apocalypse really was nigh: He passed away in 1985. As a cineaste in good standing, I love most of his arthouse pictures. But I have to admit I adore some of his trashy throwaway jobs too.

(For past editions of the Friday A/V Club, go here. For the tale of the time Welles wanted to make a conspiracy thriller about the RFK assassination, go here and here. For a much earlier Wellesian apocalypse, listen to his "War of the Worlds" adaptation here. For a debunker's guide to the legend that "The War of the Worlds" set off a mass panic, go here.)