University of Minnesota Cracks Down on Charlie Hebdo Posters: The 'Powerless' Offended Have Veto Power on Campuses

Outrage privilege: Too many universities would rather censor speech than offend fanatics 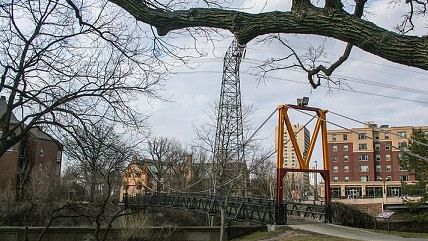 One of the most bitterly-contested points in my Bloggingheads.tv debate with City University of New York Professor Angus Johnston was my assertion that certain progressive sects—including activist Muslims—have gained tremendous influence and power on public university campuses. My opponent believes that administrators are often indifferent—if not outright hostile—to the demands of the left. We're talking about a lot of campuses and a lot of students, so Johnston is undoubtedly going to be right some of the time. And yet…

The University of Minnesota held a panel discussion titled "Can One Laugh at Everything? Satire and Free Speech After Charlie," that addressed the Charlie Hebdo massacre, historical perspectives on depicting the prophet Muhammad, and free speech law. The panel took place weeks ago, but is back in the news because of reported complaints made against posters advertising the event, according to The College Fix. The flyers, which were posted on bulletin boards around campus, used the famous Charlie Hebdo Muhammad cover to advertise the panel.

That drew an outcry from Muslim students and faculty who considered the flyers "blasphemous" for depicting the prophet, which is prohibited under Islamic tradition. Some 260 Muslims (all but 45 of them affiliated with the university) signed a petition asking the University's Office of Equal Opportunity and Affirmative Action to intervene, and at least eight people called the office to get the posters taken down for violating rules against religious discrimination, according to The Minnesota Daily. This prompted EOAA to investigate.

Thankfully, the university conceded that posters depicting a historical person and advertising a free speech event did not constitute harassment against Muslim students. Nevertheless, administrators recommended that Liberal Arts Dean John Coleman "communicate the college's disapproval of the flyer," according to Inside Higher Ed. Some faculty involved with the panel reported that they were then instructed to take down the flyers—and heavily redacted emails support their contention:

The email includes a link to the digital flyer, noting that the free speech event "took place several weeks ago." It continues: "Due to complaints about the image contained in the link, [the equal opportunity office] has requested that the image be removed from any [college] communication in all forms. If your unit still has active links to this page, or image, please remove the image. Please remove any posters on your unit bulletin boards or any other hard copies of flyers that may be still around."

Coleman reversed this order, according to The Washington Post. Good for him—that was the right thing to do. Even so, you can imagine the enormous confusion—to say nothing of job pressure—to kill the flyers that UM faculty must have been feeling. And for what? Campus outrage stories often contain a kernel of legitimately offensive content, but there is nothing objectively offensive about these flyers—which are highly relevant to the event they advertise—except from the standpoint of Muslim theology. To take down the flyers would be an act of religiously-motivated censorship of constitutionally protected speech, in the truest sense.

Ironically, this is the very principle that Charlie Hebdo's staff was massacred trying to defend: freedom from the kind of censorship imposed by religious fanatics.

American public universities might be the last place one would expect to find religious fanaticism triumphing over Enlightenment liberal values. Indeed, I can't imagine the university bending over backwards to accommodate the views of students who subscribe to other religions. What if the flyers had depicted two men kissing, and were instead being used to advertise an LGBTQ meetup, and it was fundamentalist Christian students lodging the complaints? Administrators would probably tell those students not to trample their peers' free speech rights. (At least, I hope they would.) Liberals would cheer. Why then do universities cater to the silly protestations of a different fundamentalist sect?

Underlying the disturbingly common notion that Muslims' views are exempt from criticism in a way others' views are not is the idea that insulting the followers of the prophet is akin to "punching down." Indeed, Minnesota's EOAA noted this dichotomy in its report on why the flyers should be condemned:

However, the office said in its summary for the dean, the poster had "significant negative repercussions." And given the "large-scale" global protests against the image in question, "the organizers knew or should have known" that their decision to reprint the image "would offend, insult and alienate some not-insignificant proportion of the university's Muslim community on the basis of their religious identity," the office added. It said the hurt was heightened by the fact that the insulting speech came from those with "positional power" at Minnesota.

The implication is that Muslim students are a powerless minority; as such, their feelings must be handled with care. Frankly, this is bullshit. Muslim students—particularly those in the perpetually offended camp—have plenty of social capital at a great many university campuses. Could a powerless minority partly convince the University of Michigan and fully convince the University of Maryland not to screen one of the most significant films of the year? Could a powerless minority persuade the leadership of Brandeis University—a private, Jewish institution named after a famed First Amendment jurist—to rescind a speaking invitation to a critic of that minority's beliefs?

The reality is that students who claim to be oppressed—or triggered, or microaggressed, or offended, or invalidated—are among the least oppressed people on the planet. They have found shelter at just about the only institution in existence that will break its own promises (and the law) to protect their feelings: higher education. And keep in mind that—broadly speaking—university faculty and administrators share these students' views: they, too, are politically and socially liberal, and yet risk-averse and reluctant to permit actual dissent. This deadly combination of biases makes them much more sympathetic to, say, a Muslim student group, than to the Young Republicans.

I don't mean to impugn all Muslim students—most of whom don't impose their views on everyone—or to suggest that Muslim students should refrain from defending their beliefs and criticizing their opponents. Free speech includes the right to attack other people's speech, of course. But universities—particularly public ones, like UM—are bound by a code that requires them to permit the maximum amount of speech, whether that speech is troublesome to the most powerful groups on campus, or the least. If every instance of insensitive speech toward Muslims warrants complaints, investigations, and formal condemnations, no matter how factually merited or obviously constitutionally protected, how can it be said that any university campus is a safe place for a free mind?