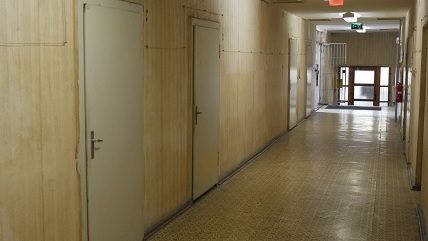 At the end of the Cold War, policy makers talked about the "peace dividend" — huge budgetary savings that could go elsewhere because fewer dollars were needed to deal with a vanquished Soviet Union. Americans may be facing a similar possibility closer to home, as crime levels plummet to the lowest they've been in decades.

Such a large portion of local and state budgets goes toward "public safety" — police services, courts, probation, prisons and jails — that there's vast opportunity for a "domestic peace dividend." Yet disagreement about the cause for the drop makes it hard for policymakers to know exactly how to respond to the good news.

And public misconception about crime rates — most think crime is stable or rising — makes it tough to back away from long-running tough-on-crime policies.

"It's such a complex, enduring puzzle," notes Joshua Chanin, a professor at San Diego State University. His view is shared among criminologists. Everyone has a favorite explanation, but no one really knows why crime keeps falling.

As the U-T reported this week, San Diego County crime rates hit a 35-year low in 2014, reflecting a 17-percent drop in property crime and a 6-percent drop in violent crime since 2013, although there was a slight uptick in homicides. In San Diego, overall rates fell 13.5 percent, making it one of the safest big cities in America.

Even one of the state's bad-news stories may not be as bad as it seems. In Los Angeles, crime is up recently, but criminologists say it may be about improved record keeping or just a blip. The good news is true across California and the country. The 304 murders in Detroit in 2014 are troubling — but it's the second-lowest level there since the final episode of "Ozzie and Harriet" aired in the 1960s.

Just as the nation's defense budget remained high to deal with an overseas threat, its criminal-justice budgets ballooned as murder rates soared in the 1970s and 1980s. The reaction was clear. "The total U.S. prison population has swelled from nearly 330,000 inmates in 1980 to 1.57 million in 2012," according to the National Association of State Budget Officers.

California, which spends among the highest amounts a year per inmate ($62,000), budgets nearly $10 billion annually for its department of corrections and rehabilitation — not that much rehabilitating seems to be going on, given California's inordinately high rate of recidivism. "Since 1980, higher education spending has decreased by 13 percent in inflation adjusted dollars, whereas spending on California's prisons and associated correctional programs has skyrocketed by 436 percent," according to a 2012 Huffington Post news report.

Such spending priorities might be defensible if they are the reason for the precipitous drops in crime. A University of Cincinnati study from 2013 put the direct price of crime at 6 percent of the nation's GDP. Then there's that intangible cost of crime — how do you really put a price tag on pain and suffering — that's hard to measure. But are public-safety budgets funding the things that matter?

It's "mystery theater," said UC Berkeley Law Professor Frank Zimring, who has written extensively about crime rates. "Everyone sees his prejudices confirmed. Whatever he's in favor of must be working." The drops were similar in places as different as Miami and Seattle, he adds. Canada — which did not follow the U.S. policy of imprisoning more people — saw almost identical trends.

Because of prison realignment (to county jails) and other policies in response to federal prison overcrowding orders, California has undertaken "a pretty substantial experiment in decarceration," he added, and yet crime just keeps falling.

Zimring points to New York City as the main example of why incarceration is not the explanation. It had much deeper and longer-lasting crime drops than other cities. In other places, incarceration rates went up by 65 percent, but in New York they dropped by 28 percent. The incarceration approach — the United States has the highest incarceration rate of any industrialized country — is based on the idea that most criminals are incorrigible and need to be locked up for decades to protect the public.

By contrast, New York found that crime is more situational — policing and social strategies can change criminal behavior at a much lower cost, he said.

While the new consensus says that incarceration isn't the answer, it's harder to find widespread agreement beyond that. Other experts question whether the number of police has much impact, except around the margins. In a number of cities, for instance, population soared while policing levels remained stagnant — yet crime fell any way.

UC Berkeley Law Professor Barry Krisberg believes increased immigration (given the lower incidence of crime among immigrants) is a key cause of lower crime rates. Another popular explanation involves demographics — the reduced percentage of men in the 18 to 30 age bracket, which are the prime years for criminal behavior. Many criminologists point to economic factors. The U.S. Department of Justice warned police about a coming crime wave in 2009 because of the recession, but that increase never materialized, and even the department admitted "a causal relationship between the economy and overall crime rates is highly debatable."

Some authors at the height of the crime boom blamed declining morals, but it's hard to argue that public morals have noticeably improved. Theories get more innovative from there. Two economists credit the legalization of abortion. One article cites an increase in antidepressant use by youth for making those potential gangsters happier (shades of "Clockwork Orange"?) and a decreasing crack epidemic. Whatever the reason, the good news has been changing the political dynamic.

The 1998 gubernatorial debate between Gray Davis, a Democrat, and Dan Lungren, a Republican, was a low point in the state's tough-on-crime frenzy, as Davis called Singapore's execution of drug offenders a "good starting point," per news reports. Voters approved a number of tough initiatives over the years, including a "three strikes" law that in recent years has been softened by the voters.

Despite its publicized flaws, the passage in November of Proposition 47, which reduces some penalties for some crimes, might reflect a changing ethos.

Sure, the Gallup Poll and a Chapman University survey find a crime paranoia that doesn't mesh with reality. That can, in part, be tied to a specific event. Chapman Professor Ed Day told me the proportion of people who believe crime is rising starts exactly at the attacks on 9/11.

Fear may also be tied to television and social media, which magnify crime stories and transmit once-local events far and wide. Consider the fracas over those "free range children" — kids who play in parks without adult supervision. Rates of child abduction are minuscule, yet the thought of it is so horrific that parents have fears out of proportion to the risk.

One fear might be diminishing — the fear of losing elections for not being sufficiently tough on crime. Politicians who recently have tried to scare the public about realignment (e.g., Abel Maldonado's use of a knife as a motto for his 2014 gubernatorial campaign) have failed. Krisberg says many Republicans — typically leaders of the law-and-order coalition — now often back changes that help reduce costs and incarceration rates, even as some Democrats oppose them because of their closeness to the prison guards and police unions.

GOP-dominated Texas has been on the forefront of this trend. By shifting resources to probation, parole and rehabilitation, Texas officials have been slashing incarceration costs while the crime rate there continues to drop, explains Chuck DeVore, vice president of the Texas Public Policy Foundation and a former Republican Assemblyman from Irvine.

"The main dividend is in safer streets, which itself helps the economy and in Texas we cut taxes two years ago while we were closing three prisons and we are looking to cut taxes again while we're continuing to shut down prisons," he said. "Now … in California, maybe you're not cutting taxes, but I suppose you'll have more money for other things there."

No wonder his testimony last year in the California Capitol met with a warm reception from Democrats, who are starting to see that a "domestic peace dividend" might be an easier way to fund all their new ideas — rather than massive tax increases.