The IRS Was Very Naughty, But It's Sorry, Says Inspector General

They won't do it again. Next time, they'll try something different. 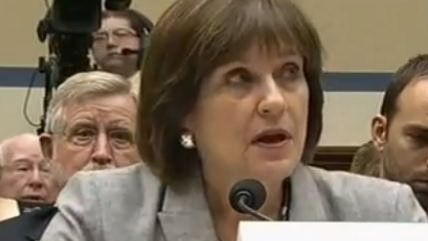 Even as the Treasury Inspector General for Tax Administration reports the discovery of thousands (!) of Lois Lerner lost-in-action emails, we're told the IRS "has taken significant actions" to avoid the sort of politicized shenanigans that got the former tax-administering bureaucrat in such hot water to begin with. Only time will tell whether the recovered missives reveal deliberate targeting of conservative tax-exempt organizations as part of an effort to hobble critics of the administration, but Inspector General Russell George and company have already concluded that right-leaning groups received inappropriate scrutiny—and say that the tax agency is taking steps to make sure that this particular transgression isn't repeated. For what that's worth.

The report is a follow-up to a May 2013 TIGTA report, which found that ineffective IRS management resulted in: 1) the use of inappropriate criteria to identify for review organizations applying for tax-exempt status based on names and policy positions instead of indications of political campaign intervention; 2) substantially delayed processing of certain applications, and, 3) the issuance of unnecessary information requests.

And before we even get into it, the IG told inquiring members of Congress two years ago that conservative groups did indeed receive special attention not given to those leaning to the left. "Our audit did not find evidence that the IRS used the 'progressives' identifier as selection criteria for potential political cases between May 2010 and May 2012," he wrote to Rep. Sandy Levin (D-Mich.). All of the groups with "Tea Party," "patriots" and "9/12" in their name got the treatment, compared to 30 percent of the groups with "progress" or "progressive" in their names.

This continues a long tradition in this country of the IRS being wielded as a political weapon.

But that is coming to an end. Well, at least this version of that particular abuse won't be done in quite the same way in the future. According to today's report (PDF):

Among other changes, the IRS "eliminated the use of Be On the Look Out (BOLO) listings, which TIGTA determined had contained inappropriate criteria regarding political advocacy cases." It's also processed a lot of the long-delayed tax-exempt applications and implemented a quality review process.

Well, that's that, then.

If I sound cynical, like I expect to see some version of political hatchetry by the IRS in the future, that's only because I do. We've been down this path before, and tax collectors with vast authority are much too effective as political weapons for government officials to resist the temptation.