Open Borders in America: A Look Back and Forward 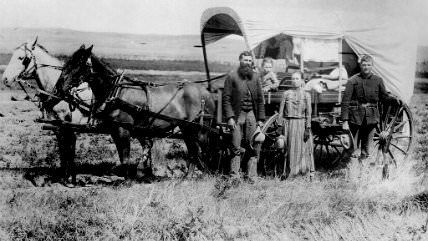 Reason magazine, in print since 1968, has long focused on immigration policy in general, and, specifically, open borders—the idea that people's movement across national boundaries ought to be free of government restrictions.

For much of its history, America had essentially open borders, both before the establishment of the United States and after. In 1921 the Emergency Quota Act, initially intended to be a temporary measure, imposed the first serious restrictions on entry into the United States.

The restrictions were motivated by nativist sentiment, xenophobia, and fears over economic and social stability. Critics of liberal immigration policies wrote off America's open-border past as a product of the massive frontier the country had, which gave immigrants ample room to settle. But as Joseph P. Martino noted in "Two Hands, One Mouth," an article in the September 1984 issue of Reason, the idea that immigration didn't threaten America when it was a younger country because of the enormous frontier has never really been based in reality.

Ironically, [the] simple picture of immigrants settling on the frontier never was true. If we check out the history of various immigrant groups in America, as Thomas Sowell did in his book Ethnic America, we find a more-revealing picture.

Sowell reports that in 1900, over half of the farmers in America were of German ancestry. That is, the bulk of the immigrants who settled the frontier were Germans. Even so, during colonial times nearly half the German immigrants were craftsmen rather than farmers and worked at their crafts after they immigrated. By the late 19th century, the proportion of farmers among German immigrants had dropped to 25 percent.

Most Jewish immigrants, from colonial times on, were craftsmen and businessmen rather than farmers. In fact, the massive influx of Jews in the late 19th and early 20th centuries (one-third of all Jews in Eastern Europe immigrated to the United States during that period) remained and worked almost exclusively in the large cities of the East.

The same, wrote Martino, held for Italian, Slavic, and even Japanese immigrants, many of whom took jobs unrelated to the frontier and, in fact, came to the country after the frontier had been mostly settled. Martino concluded:

Does this [lack of evidence immigration causes economic harm] mean we ought to throw open the gates and let anyone enter who wants to? The American experience of a century ago and the experience of Hong Kong today suggest that we might very well be better off for doing so. However, that's another subject entirely. The point here is simply that whatever we do about the level of immigration shouldn't be done relying on the standard arguments about jobs and resources. They are false to the core.

Unfortunately, more than 30 years later, those same false arguments dominate immigration debate. And Reason continues to offer counterarguments. Here's some of Reason's best open-border content from the past few decades.

In a March 1987 editorial entitled "Freedom Without Borders," Virginia Postrel wrote of a U.S. government "eager to deny" immigrants:

Even as we cheered the Statue of Liberty last year, Congress slapped more locks on the golden door.

Contrary to fashionable opinion, the government doesn't simply discriminate against people fleeing right-wing regimes. It takes a more general closed-door stance. The freedom-loving folks at the Immigration and Naturalization Service granted asylum to only seven of the 216 Guatemalans who asked for it last year. But they also denied almost 3,000 Nicaraguans the same status, accepting fewer than 1,300 as refugees. Even people from Afghanistan find themselves behind bars in America. Our borders, too, have become prison walls for the oppressed.

If he were making a movie "about the Jewish immigrant experience in the United States, cartoonist Art Spiegelman says he'd show the mice drowning off the coast of Cuba while U.S. officials refuse to let them in—not cheerfully singing a la Steven Spielberg's An American Tail. Our immigration policy has changed little since the government turned away thousands of Jews in the '30s and '40s, sending them to their deaths in Europe. The names have been changed, but mice are still drowning. The struggle for human rights does begin at home, after all.

In an April 2006 piece titled "Open the Borders," Tim Cavanaugh made his case for doing so:

When asked about visaless borders, every person I interviewed for this article gave two replies: that we need to be realistic about our options, and that the guest-worker compromise will be more fair than what we have now. The first of these answers is half-right: In the current political climate, the idea of eliminating visa requirements with Canada and Mexico seems as heretical as the notion of pasteurization or a sun-centered solar system.

Beyond that, the arguments of realism and fairness are entirely wrong. The guest worker compromise is unrealistic because it has nothing to do with economic reality on this continent. Nor is it especially fair: At best it will grandfather in some portion of the existing undocumented workforce (and probably not a very large portion). For anybody who dreams of coming to the United States for a better job, or to start his or her own taqueria or a retail toque outlet, the various current Senate proposals will not increase, and may even reduce, the legal opportunities to pursue the American dream.

Since all parties to this debate draw a line between legal and illegal immigration, we should note that visaless borders would greatly increase the former and virtually eliminate the latter. Is that a problem? I don't think so, and people who oppose the idea need to explain why they think it would be.

In a July 2007 piece, "Open Markets, Closed Borders," Kerry Howley explored dissonance among Republicans who support the free movement of goods, but not people, between nations:

The simultaneous opening of markets for goods and closing of markets for labor has sparked a strange dissonance in debates about free trade. The same Republicans who will go to the mat for your right to buy cheap widgets from Bangladesh will fight as hard to keep the widget makers safely behind the fence. Burmese kids are watching pirated copies of Pirates of the Caribbean and reading translations of Harry Potter novels, but bureaucratic barriers to mobility loom larger for them than they did for their great grandparents.

As [World Bank socioeconomist Lant] Pritchett points out, "the current differences in unskilled wages, or wages adjusted for skill, are more than twice as large as those that set the world in motion in the late nineteenth century." The benefits of mobility, in other words, are far greater. Simply transferring the same labor from Mexico to the U.S. promises a huge and unprecedented jump in standard of living.

Put that way, what becomes extraordinary about the United States is its impenetrability, not its much decried porousness. The Land of the Free is, contrary to popular opinion, not packed coast to coast with disease-ridden castaways. The U.S. ranks 168th in population density, below the vast majority of developed countries. As earnest pundits are fond of pointing out, there is a "real" America out there, and it's largely a land of sparsely dotted exurbs and open space.

In a January 2008 editor's note, Nick Gillespie addressed open borders as a policy goal and some of the steps that can be taken to get there:

Surveys suggest that up to 80 percent of Americans support some type of guest worker program. The failure to hammer out details on such a plan was one reason "comprehensive" immigration reform legislation went nowhere in Congress last year.

While guest worker programs are no substitute for open borders, they may represent the best hope for increasing legal migration to our shores. As Howley writes, the programs are an "alternative to prohibition. In a political environment. In a political environment where full mobility is as unlikely as full drug legalization, such incremental change may be the only alternative to stasis."

That's a far and shameful cry from the freedom of movement Americans have long taken for granted. And as Howley notes, "host countries are right to worry about the moral complexities of a legally divided society." But if such programs allow poor people to make themselves much better off, they are certainly worth looking at very closely.

Thirty years after the Immigration Reform and Control Act of 1986 there have been no substantive changes to immigration policy, even as it remains a hot-button issue. Two years ago, Reason released a guide to immigration reform titled "Humane and Pro-Growth", edited by Shikha Dalmia. Among the collected articles was Dalmia's case for opening America's borders. An excerpt:

Reason TV has also been interested in immigration reform since its inception. Check out Drew Carey making the case for open borders in a 2008 Reason TV video: