Interview with Christina Hoff Sommers: Safe Spaces and the Illiberal Mob at Oberlin 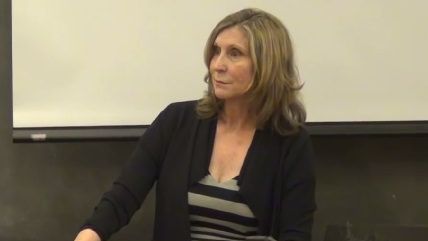 â€œIt was so over the topâ€"it was pure performance art.â€

That was feminist scholar Christina Hoff Sommersâ€™ take on the student-activists who prefaced her talk at Oberlin College on Monday with an appeal for anyone who felt unsafe to seek sanctuary in the designated â€œsafe space.â€

Why would students have had cause to feel unsafe? What was so threatening to their physical and mental well-being? Was there an axe murderer wandering the campus that evening? No, just Sommersâ€"a resident scholar at the American Enterprise Institute known for expressing classically-liberal, freedom-inclined views on gender issues.

Sommers visited Oberlin to talk about her brand of feminism. The event drew protests and furious denunciations from far-left students, who penned an op-ed for The Oberlin Review accusing  Sommers of being a â€œrape denialistâ€ and promoting a cycle of violence against women. That article is here (note the trigger warning):

The Oberlin College Republicans and Libertarians are bringing Christina Hoff Sommers to speak on Monday, April 20. This Monday happens to be a part of Sexual Assault Awareness Month, which makes the timing of this talk particularly objectionable. Though OCRL advertised Christina Hoff Sommers as a feminist with a â€œperspective that differs from the general Oberlin population,â€ they failed to mention that she is a rape denialist. A rape denialist is someone who denies the prevalence of rape and denies known causes of it. Christina Hoff Sommers believes that rape occurs less often than statistics (those which actually leave out a plethora of unreported rapes) suggest.

The entrance to the classroom where Sommers spoke was surrounded by flyers accusing her of supporting rapists. â€œFuck anti-feminists,â€ read one sign.

The students responsible for the safe space were more polite, although they did joke about biting people they disagreed with and promised to zealously guard their precious space from â€œtoxic, dangerous, and/or violentâ€ peopleâ€"anyone who didnâ€™t share their perspective, in other words. (Video of that here, courtesy of Nick Mascari, Third Base Politics).

Sommers told Reason that the most bizarre form of protest was the students who sat in the front row during her talk with their mouths taped shut.

Others did more than stare; they interrupted and booed whenever Sommers said something that irked them. At one point, a philosophy professor in the audience stood up and called for civility. They mocked him and yelled at him to sit down, according to Sommers.

Still, she was able to handle the crowd and give her talk. Afterward, some of the hecklers followed her to the restaurant where she was dining with the students who had brought her to campus, and they had a mostly friendly discussion, she said.

Sommers thinks at least some of the students who heard her speak were surprised to learn that she wasnâ€™t the monster the activists had made her out to be.

â€œMy talk is liberal: pro-women, pro-feminism, pro-social-justice,â€ she said. â€œI bet a lot of people in that room agreed with me.â€

But many others were somehow convinced that Sommersâ€™ presence was making them unsafe. Ironically, the campus police reached the opposite conclusion: if anyone was unsafe, it was Sommers. Thus, she was given a police escort during her time at Oberlin.

The appeal to safety is just the latest vehicle for shutting down debate on campus, according to Sommers.

â€œPeople are always eager to censor and to find new excuses, and this is original, that it undermines your personal safety and subjects you to panic attacks to hear a dissident opinion,â€ she said.

But students may increasingly feel entitled to this pernicious kind of securityâ€"protection from new ideas. Thatâ€™s because university administrations have less and less choice but to oblige them, thanks to the Office for Civil Rightsâ€™ curious interpretation of Title IX, which seems to be providing legal cover for a modern-day Spanish Inquisition.

*Update: This link is a video of Sommers' similar talk at Georgetown last week. I initially identified this as her Oberlin talk.