Pricing yourself out of the market is not so smart 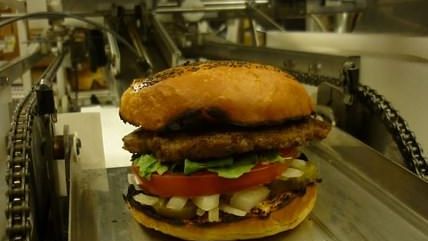 The Momentum Machines website is low-key right now, but that may have something to do with high-profile arguments in the press and protests in the streets demanding that fast-food chains pay workers $15 an hour to do the job the company's robots are designed to fill. Even before those placard-wielders decided to raise their costs in terms of dollars and grief, the San Francisco-based start-up announced that they were obsolete.

Fast food doesn't have to have a negative connotation anymore. With our technology, a restaurant can offer gourmet quality burgers at fast food prices.

Our alpha machine replaces all of the hamburger line cooks in a restaurant.

It does everything employees can do except better:

*it slices toppings like tomatoes and pickles only immediately before it places the slice onto your burger, giving you the freshest burger possible.

*our next revision will offer custom meat grinds for every single customer. Want a patty with 1/3 pork and 2/3 bison ground after you place your order? No problem.

*Also, our next revision will use gourmet cooking techniques never before used in a fast food restaurant, giving the patty the perfect char but keeping in all the juices.

*it's more consistent, more sanitary, and can produce ~360 hamburgers per hour.

The labor savings allow a restaurant to spend approximately twice as much on high quality ingredients and the gourmet cooking techniques make the ingredients taste that much better.

Separately, the company noted, "An average quick service restaurant spends $135K every year on labor for the production of hamburgers. Not only does our machine eliminate nearly all of that cost, it also obviates the associated management headaches."

Even before Momentum Machine started mechanizing the burger-flipping process, McDonald's moved to make ordering a task that could be accomplished untouched by human stupidity. The fast-food chain is bringing self-order kiosks to the United States after deploying thousands of them overseas.

I'm guessing that workers in the streets demanding that their pay be hiked by fiat to $15 per hour do not erode Momentum Machine's competitive edge, or its attractiveness as an alternative to human employees. Those kiosk makers are probably warming up the production line, too.

Ron Bailey recently noted that "Defying the law of demand will end up harming lots of the people minimum wage proponents aim to help."

Yep. But the robots appreciate the effort.