Taking Comics to the People 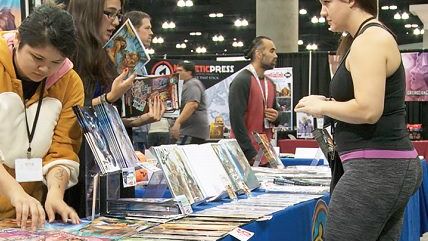 "Any time you don't have to ask permission is awesome. And now you don't," says Jason McNamara, an award-winning graphic novelist based in northern California. McÂ­Namara is just one of many in the comics community turning away from traditional publishing and toward digital platforms like Kickstarter and comiXology to finance and publish their work.

It's a strategy that worked well for McNamara's last release, The Rattler, a graphic novel he co-created with Los Angeles artist Greg Hinkle. The writer launched a campaign through Kickstarter, the online crowdfunding website that lets potential customers contribute money to help get creative or business projects off the ground. His goal was to raise $4,600 to publish the book; he ended up collecting pledges worth more than three times that amount from 390 different backers. "By going through Kickstarter first, we could get a real idea of what the interest is for this book," McNamara says. "There is an element of entrepreneurship and there's a gamble that appeals to people. In Kickstarter, I've had better conversations with [fans] than I've had over the past 10 years of doing conventions."

The emergence of crowdfunding sites has provided fans with a more diverse selection of comics by allowing creators such as McNamara to sidestep editorial gatekeepers and bring their art directly to consumers. Before online platforms like Kickstarter came along, graphic novelists essentially had two choices: work with Diamond Comic DistribuÂ­tors-a company that boasts exclusive arrangements with most American comic publishers and stores-or publish, fold, and staple your books yourself, hoping you'll be able to sell them in person at events.

"In order to get in the comic shops you had to go through Diamond. They do have a monopoly in the comics community," explains Matt Silady, chair of the Master of Fine Arts in Comics program at California College of the Arts in San Francisco. "Diamond does a lot of great things for retailing, but they also have a business model that requires you to have a certain number of pre-orders for you to even be considered as part of their catalog. If you're not in that catalog, nobody is seeing your work."

Now artists and writers can showcase their offerings on a variety of websites and speak directly to fans without sacrificing artistic integrity or ownership.

"Diamond will turn a lot of stuff down based on whether they think it's worth it to them," says McNamara. "You have to appeal to their taste and what they think. But comiXology is more openâ€¦Kickstarter-there is no barrier of entry. Which is great, because if you want to make comic books, no one is saying 'no' to you anymore. You just have to find the right platform."

As more creators look online to publish their work, consumers are also embracing the digital marketplace. Comic book sales broke industry records in 2014, with digital comics contributing an estimated $90 million in sales, according to the most recent numbers published by IcV2, a news and data source that serves pop culture retailers. The rise of these digital platforms has only helped to expand readership-which has led to bigger profits in the comics industry and a reported 4 percent increase in the number of brick-and-mortar comic book retailers.

"Overall, comics is healthier than ever as an art form," says Silady. "There's nothing more exciting than the traditional barriers falling away and someone having art, showing it, and being able to put it out there without having to compromise."