Friday A/V Club: In a Parallel Universe, a Steakhouse Won the 1992 Election

Don't blame me, I voted for Sizzler. 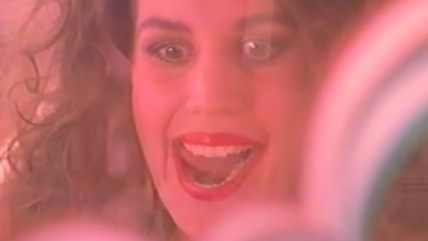 Remember the 1992 presidential election? In the GOP, Pat Buchanan was challenging George H.W. Bush from the right. On the Democratic side, Bill Clinton faced off against Paul Tsongas, Jerry Brown, and others. Outside the major parties, Ross Perot's independent campaign attracted millions of supporters.

And then there was a candidate who knew what America was all about. A candidate who believed in choice and freedom, and who didn't want any child to go to bed hungry. As the race began in 1991, this candidate's team put together a video showcasing their standard-bearer's values. It's a masterpiece of political persuasion—at least up until the final moment, when the producers made the questionable decision to end the ad with Satan urgently hissing the candidate's name:

We don't know how different the country would be if Sizzler had won the presidency. But I have a feeling we'd be a land of freedom, family, big buffets, creepily excessive smiles, and early-'90s hair.

(If you want a more detailed analysis of this video, Dave Holmes has you covered here. Wikipedia blames the buffet court for Sizzler's 1996 bankruptcy here. For past installments of the Friday A/V Club, go here. You may find it particularly interesting to compare and contrast today's edition with this one.)