UPDATED: On Jackie Robinson Day, Let's Remember When He Was Fired From the New York Post for Being Too Republican

Some heroes are just too complicated for canned history 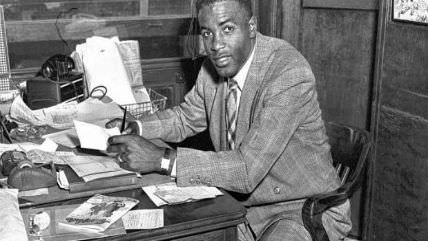 Today is the 68th anniversary of Jackie Robinson breaking Major League Baseball's notorious de facto ban against players having skin tone a shade or two darker than pure Castilian soap. As is the annual tradition, all MLB players today are wearing Robinson's #42 in homage.

As I (and plenty of others) have long argued, Jackie's awe-inspiring legend has, if anything, given short shrift to what a colossally competitive, accomplished, and complicated man he really was. He has as good a claim as anyone else at being the best all-around athlete of the 20th century (he was also a national champion long jumper, league champion collegiate basketball scorer, and All-American halfback at UCLA). He was a prolific if underappreciated author. A passionate and righteously angry civil rights activist. A banker/entrepreneur, active Rockefeller Republican, and the first black columnist for a major non-black newspaper, The New York Post. Which fired him for being too pro-Nixon.

There was an entertaining collection of Robinson's newspaper and magazine writing brought out two years ago, titled Beyond Home Plate: Jackie Robinson on Life After Baseball. The intro, written by the civil rights historian Michael Long, is an almost anguished attempt to explain how this anti-racist hero could have belonged to the yucky Republican Party. Sample:

It may seem strange to us now that Robinson found a home in the Post, but at this point in history the newspaper was known for its liberalism. It was simply impossible to find the politically conservative opinions that are so characteristic of its op-ed pages today. And as a liberal paper, the Post had given Robinson, and larger civil rights issues, favorable coverage through the years; it was one of the few racially progressive media outlets of its time.

OK, so what happened with the Nixon/Kennedy business, then?

On November 4, 1960—Election Day—Post Editor James Wechsler informed Robinson that he and Dorothy Schiff had decided not to resume his column. (Robinson had taken a leave of absence to serve on Richard Nixon's campaign team in September 1960.) Wechsler, a Kennedy supporter, apparently felt that Robinson's pro-Nixon sentiments had led to unfair reporting during the presidential campaign[.]

Jackie's retort, published at his new home in the New York Amsterdam News in January 1962, is filled with some classic Robinsonian acid:

No one will ever convince me that the Post acted in an honest manner. I believe the simple truth is that they became somewhat alarmed when they realized that I really meant to write what I believed. There is a peculiar parallel between some of our great Northern "liberals" and some of our outstanding Southern liberals.

Some of the people in both classes share the deep-seated convictions that only their convictions can possibly be the right ones. They both inevitably say the same thing: "We know the Negro and what is best for him."

Your piece (and, I presume, the book on which it was based) is very incomplete and misleading.

Dorothy Schiff and Jimmy Wechsler knew all about Robinson's Republican leanings and had no problem with it. (The Post, after all, had all but endorsed Rockefeller in 1958, pulling its endorsement of Averell Harriman at the last minute in a front-page editorial.)

But there were two problems, which are clear if you consult a different book—a collection of Robinson's correspondence over the years.

1) Robinson never told The Post he was taking a leave from his column to work for Nixon. But he did tell the New York Times—which is where Schiff and Wechsler first found out about it. Not a good way to treat the people who are paying you.

2) Jackie Robinson had almost nothing at all to do with the column, which was completely ghost-written by a long-time aide. At best, he chose a topic (or agreed with the one that was chosen) and then gave it a read before it was submitted.

This was the excuse Wechsler cited in declining to resume the column after Election Day, saying they'd agreed to it in the first place with misgivings, but appreciated his marquee value. But the real deal-breaker was his having publicly embarrassed his publisher and editor.

It had nothing to do with his being a Republican—The Post, after all, ran William F. Buckley's column (and Evans and Novak) long before Murdoch bought the paper.