DHS Will Now Indicate When Somebody's on Their No-Fly List

You are now free to discover whether you are actually free to fly the friendly skies. 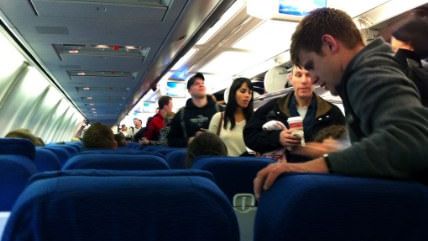 Among the many, many problems with the federal government's opaque, inscrutable "no-fly list" system is that the government refuses to tell individuals if they are actually on the list. Individuals who find themselves turned away by airlines are left with a bureaucratic process akin to stuffing a message into a bottle and tossing it into the sea. If they know that they aren't actually terrorists, they submit information to the Department of Homeland Security and explain who they are to try to be removed from the list. But the federal government won't actually confirm that any individual is on the list, claiming national security. The federal government has been sued over this reversal of due process and has been losing. The government has been ordered to set up a more transparent system for people to challenge inclusion on the list.

Obviously, the secrecy over whether somebody is actually on the no-fly list would have to be one of the first things to go, and that's exactly what's happening. In response to a lawsuit, Attorney General Eric Holder has announced a change of policy. Those who run into refusals as part of this system and attempt to appeal will actually be informed whether they are on the list. The shift was noted by the Federation of American Scientists:

"Under the previous redress procedures, individuals who had submitted inquiries to DHS TRIP [the Department of Homeland Security Traveler Redress Inquiry Program] generally received a letter responding to their inquiry that neither confirmed nor denied their No Fly status."

"Under the newly revised procedures, a U.S. person who purchases a ticket, is denied boarding at the airport, subsequently applies for redress through DHS TRIP about the denial of boarding, and is on the No Fly List after a redress review, will now receive a letter providing his or her status on the No Fly List and the option to receive and/or submit additional information."

If the individual traveler chooses to pursue the matter, DHS "will provide a second, more detailed response. This second letter will identify the specific criterion under which the individual has been placed on the No Fly List and will include an unclassified summary of information supporting the individual's No Fly List status, to the extent feasible, consistent with the national security and law enforcement interests at stake."

As was previously leaked last summer, there are hundreds of thousands of people on government watch lists that have no known connections to terrorist groups. Being on a watch list isn't the same as being on the no-fly list, but the lists still make travel miserable for those people. In one of the lawsuits prompted by the no-fly list, the plaintiff was on the list entirely by accident. An FBI agent checked a wrong box on a form, and it took her years to fix, the federal government fighting her the entire time. This change will be a boon to others like her, one hopes.

Update: Here's a response from Hina Shamsi, the director of American Civil Liberty Union's National Security Project. They've been representing the people on the list in these cases:

"After years of fighting in court for complete secrecy and losing, it's good that the government is finally now going to tell people of their status on the No Fly List. Unfortunately, we've found that the government's new redress process falls far short of constitutional requirements because it denies our clients meaningful notice, evidence, and a hearing. The government had an opportunity to come up with a fair process but failed, so we're challenging it in court again."