Chris Christie: I'd Crack Down on Legal Weed in Colorado, Washington as President 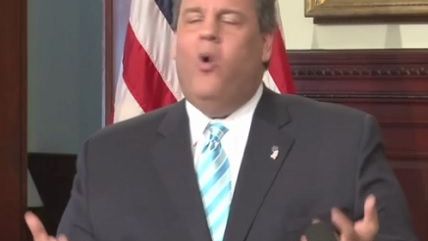 As if anyone needed another reason to dislike New Jersey, the state's governor, Chris Christie,  a likely Republican presidential candidate, just said if he were president he'd crack down on legalized marijuana. On the Hugh Hewitt Show, Christie was asked if he'd enforce the drug laws in Colorado and Washington, which Hewitt said were "flaunting federal law by allowing people to sell dope legally." Christie said he'd "crack down and not permit it." Hewitt was ready to move on but Christie had more to say:

HH: All right, next…

CC: Marijuana is a gateway drug. We have an enormous addiction problem in this country. And we need to send very clear leadership from the White House on down through the federal law enforcement. Marijuana is an illegal drug under federal law. And the states should not be permitted to sell it and profit from it.

Christie, a former prosecutor, may not exactly be about enforcing all the laws when it comes to marijuana, his rhetoric on Hewitt's show notwithstanding. The legislation legalizing medical marijuana went into effect in 2010, but the governor has been notoriously slow about implementing the law. He worries about medical marijuana dispensaries' "profit motive". The first one didn't open until 2012. New Jersey being New Jersey, the state's medical marijuana regulations are some of the largest in the country.

When he was first elected, Christie was hailed by Republicans looking for a post-2008 hero as the kind of Republican that can win in blue states like New Jersey. His two terms have showed what that looks like—a candidate with the worst nanny state tendencies of both major parties.