Ready for Hillary? Take Our Quiz and Find Out!

Test your knowledge about the Democratic frontrunner. 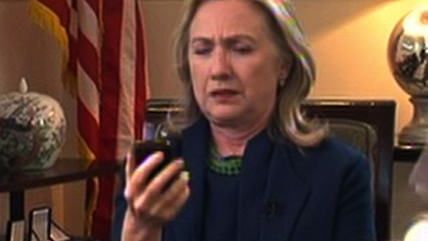 Yesterday, former senator and secretary of state Hillary Clinton officially entered the race for the presidency. Clinton has been a part of our national public life for more than two decades now, but how much do you really know about the candidate? Take our quiz and find out!

2. Clinton nearly won the Democratic nomination in 2008, but she alienated much of the party base by (a) supporting a disastrous war, (b) cozying up to Wall Street donors, (c) being a political insider at a time when the country was hungry for someone new, or (d) doing these things while a Republican was president.

3. This time around, Clinton's chief rival for the nomination is (a) Massachusetts Sen. Elizabeth Warren, (b) Maryland Gov. Tommy Carcetti, (c) singer-songwriter Jimmy Webb, or (d) a powerful but inchoate sense of unease.

4. Though she didn't formally enter the campaign until yesterday, Clinton's supporters have been beating the drums for her candidacy much longer. Their slogan is (a) Ready for Hillary, (b) Resigned to Hillary, (c) Preparing for Chelsea, or (d) What Difference, At This Point, Does It Make?

5. Clinton herself recently deployed the slogan #GrandmothersKnowBest. The context was a debate about vaccines, but her larger point was that (a) the state of medical knowledge has been in decline for two generations now, (b) she has reconsidered the value of gendered stereotypes in politics, (c) you should ask your right-wing grandmother who to vote for, or (d) she's heard about hashtags.

6. Clinton's firm public commitment to marital equality began (a) when she was grown in a pod at an Islamo-Marxist think tank, (b) when her husband briefly flirted with the idea of not hassling gay people in the military, (c) when some right-wing maniac signed something called the Defense of Marriage Act, or (d) two years ago.

7. Clinton's proudest political accomplishment is (a) reforming American health care, (b) liberating Libya, (c) something about a travel office, no one remembers the details, or (d) getting out of Arkansas.

8. Clinton began her political life as a Goldwater girl, then started hanging out with the decentralist radicals Saul Alinsky and Carl Oglesby. She played a role in bringing down Richard Nixon, and her early writing on children's rights was cited approvingly by the godfather of anarcho-capitalism, Murray Rothbard. From these facts we can conclude that (a) she's really Rand Paul, (b) all that later stuff about ClintonCare and the Iraq war and propping up Wall Street was a big misunderstanding, (c) you're gonna sell out too someday, or (d) LIBERTARIAN MOMENT, HERE WE COME!

There are no answers. There are only questions. You make the path by walking. Be here now.