"Everyday Americans need a champion. I want to be that champion." 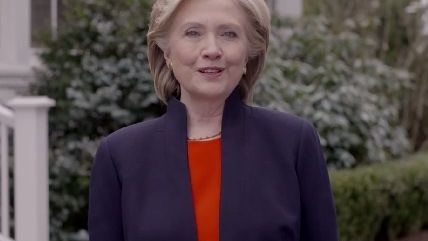 Hillary Clinton is running for president. She made it official in a just-released campaign video that calls attention to all the mundane things that normal, well-adjusted people will be doing next year instead of seeking the power to control millions of people's lives.

The video is here.

Wait, that's not it! Sorry. Here it is, I promise.

Her campaign website is also live. "Everyday Americans need a champion," it says. "I want to be that champion."

Clinton is expected to easily win the Democratic Party's nomination, though the general election is (at this point) expected to be a close contest, according to Nate Silver.

Keep checking Reason for all the latest campaign news as this ignoble spectacle continues, eventually giving way to a coronation for one dynasty or the other.