Wants to "take back America" from special interests. 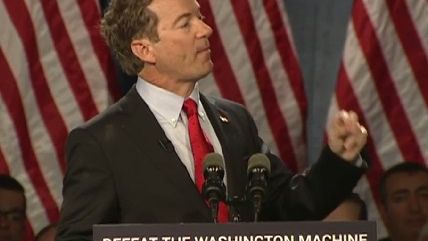 Rand Paul's campaign kickoff just concluded with a rousing speech by the libertarian-leaning U.S. senator from Kentucky in which he promised that his first act as president would be to stop the NSA's illegal spying on American citizens.  He vowed to win the White House while clutching the Bill of Rights in one hand and the Constitution in the other.

Paul's speech hit on seveal big themes of his candidacy: ending cronyism, reforming the criminal justice system, and (most worryingly, for many libertarians) defeating radical Islam.

His speech began with a thunderous pledge to "take back America" from special interests—from a collusion of big government and big business.

Paul also spent time elaborating on his foreign policy views, which have been presented as more hawkish in recent months. He continued his tough talk on Iran, touted his support for sanctions, and asserted that, "until we name the enemy, we can't win the war." The enemy is radical Islam, according to Paul.

Even so, the senator tempered his fiery foreign policy rhetoric with some non-interventionist sentiment. He decried nation-building in the Middle East and lamented that the U.S. "borrows money from China to give to Pakistan."

The speech wasn't all political soundbites. Paul also discussed his career as an eye surgeon; work can be its own reward, he said—especially when work involves restoring people's eyesight.

Paul wants his fellow Congressmen to spend more time actually using their eyes—to read bills before they pass them. Only in Washington, D.C., could that message generate any disagreement.