Enjoy that slice of victory cake. It tastes like...What the hell is that? 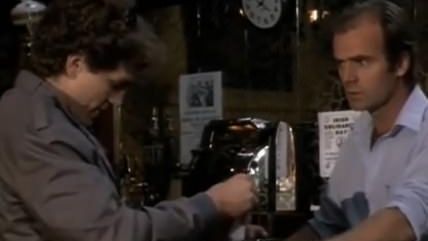 I hoped the culture-war silliness might have ended by this week, but this morning the headlines contain the tale of a pediatrician unwilling to treat the child of a lesbian couple, and yet another successful fundraiser for a business (this one a florist) facing official sanctions after refusing to sell wedding flowers to same-sex customers. So lets talk about why it's a bad idea to force people who don't like you to do business with you.

One of my favorite movie scenes is from The Pope of Greenwich Village. A New York City traffic cop turns a neighborhood against him by towing every car in sight and shaking down a local bar for free drinks.

What are they going to do about it, right?

What they're going to do is slip horse laxative into his drink at the bar—and then lock the door behind him when he goes outside to get back to work. Hilarity ensues in the street.

I doctored a few drinks myself in my ill-spent youth—just spit in 'em—when I tended bar and people pissed me off. But maybe I'm mean. I've been told that I am, and I don't doubt it. But I'm willing to guess that a fair sampling of overt bigots are meaner than I am, when push comes to shove.

The thing is, freedom of association—and disassociation—aren't just abstract individual rights dreamed up as intellectual games. They're practical knife fight-preventatives. If people can't play nice, you want to keep them separated. If they're willing to separate themselves, so much the better. Shaming people who refuse to associate with others for contemptible reasons is a perfectly legitimate response. But forcing them into proximity may not produce ideal results.

Even if people aren't overtly malicious when forced to serve people they don't like, just how enthusiastic is their work going to be? Do you really want somebody who hates you to photograph your special occasion? Or care for your child? Or serve you food of any sort at any place or time? There's a good chance you're just not going to get best efforts.

Sure that's unprofessional. And?

So we'll see how the culture wars shake out. My guess is that tolerance is growing and bigotry receding, despite the best efforts of poor winners to make the dwindling holdouts feel like martyrs to their lousy cause.

But forcing people to do business with you? Putting yourself at the mercy of people who hate you? That's always a risky idea.

Don't believe me? Fine. Enjoy that slice of victory cake. It tastes like…What the hell is that?