Revealed: The Final Stage of Socialism is a Shortage of Toilet Paper! 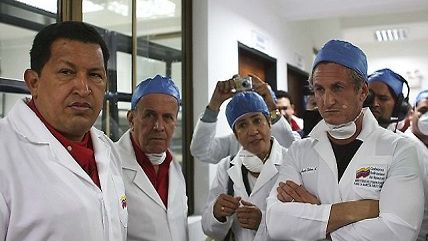 For Marx, capitalism would give way to socialism, which would give way to communism, and the withering away of the state and all forms of repression and oppression. Perhaps one of the reasons that things never work out that way is that the revolution craps out during the socialism phase. Literally.

Venezuela has been going through a prolonged shortage of all manner of consumer goods for several years. Especially toilet paper, which is so scarce that black-market rates are more than five times as high as supermarket prices, according to Fusion, and hotels are telling guests to bring their own toilet paper and soap.

The Cato Institute's David Boaz writes at Business Insider that such shortages happen first as tragedy and then as farce:

In 1990 I went to a Cato Institute conference in what was then still the Soviet Union. We were told to bring our own toilet paper, which was in fact useful advice.

Now, after only 16 years of Chavista rule, Venezuela has demonstrated that "Socialism of the 21st Century" is pretty much like socialism in the 20th century….

But what I never understood is this: Why toilet paper? How hard is it to make toilet paper? I can understand a socialist economy having trouble producing decent cars or computers. But toilet paper? And soap? And matches?