American Foreign Policy Only Puts Us In More Danger

We would be safer from terrorism without the U.S. government. 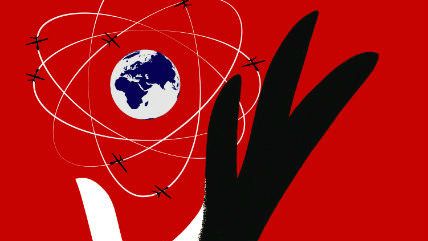 American politicians frequently declare that the government's first duty is to protect us from foreign threats. If that's so, why have they embroiled us in the Middle East?

Instead of keeping us safe, they seem to strive to put us in harm's way by provoking one side or the other in sectarian, ethnic, tribal, and political conflicts. With one glaring exception—Israel versus Palestine—the U.S. government has been on almost every side of these complicated conflicts at one time or another, depending on the geostrategic context. Considering that record, maybe we should reassess this thing called government. Perhaps if we didn't have it, we wouldn't need it.

Following his predecessors, Barack Obama today has us ear-deep in the old conflict between Sunni and Shiite Muslims, as well as in the overlapping political friction between Arabs and Iranians (Persians) for regional dominance. What makes this all the more bewildering is that the Obama administration isn't firmly on one side or the other. In Syria it is officially against Shiite Iran's ally President Bashar al-Assad, a position that objectively helps Sunni ISIS and the al-Qaeda affiliate, which also oppose Assad. But in neighboring Iraq, Obama is de facto allied with Iran and its Shiite ally-regime in Baghdad against ISIS. [George W. Bush's overthrow of Iraq's Saddam Hussein guaranteed that Iraq and Iran would be allies.]

The latest wrinkle is now occurring in Yemen, a country long plagued by sectarian, tribal, and political turmoil. The United States has aggravated the conflicts through drone warfare, by engineering the replacement of one leader with another, and by its intervention and distribution of arms throughout the region. Al-Qaeda in the Arabian Peninsula did not exist before the U.S. invasion of Iraq.

The Houthis, who practice a form of Islam, Zaidi, that in some ways resembles Shiism and in other ways Sunnism, have taken control of parts of Yemen. But how is that a threat to us? These opponents of al-Qaeda are said to be backed by Iran, though this is undoubtedly an exaggeration, if not a fabrication, because the dispute appears to be internal. Nevertheless, for the ruling elites in the United States, Israel, and Saudi Arabia, Iran is the bogeyman, so it's threatening everywhere. Patrick Cockburn, a reporter familiar with the region, warns that U.S. backing of Sunni Arab intervention in Yemen could produce a self-fulfilling prophecy by driving the Houthis firmly into the Iranian and Shiite camps.

The question is: why must Americans be embroiled in this civil war as well as the wars in Syria, Iraq, and Libya? If Iran and Saudi Arabia want to contend with each other for dominance in the Muslim world, what business is that of ours? All we can do is worsen the violence. No wonder so many people wish us ill.

Some might reply that neglecting the region would create breeding grounds for terrorism. But it's intervention that breeds hatred of and possibly violence against Americans. Oil isn't a good answer either. Whoever controls the oil will sell it—if not to Americans, then to others who will then sell it to Americans in the global market. When you factor in the high cost of the American military, oil isn't so cheap.

And while we're questioning the sense of putting Americans in the middle of foreign conflicts, let's not forget U.S. policy toward Israel. Israel was founded mostly on land seized illegitimately from Palestinian Arabs—Muslim and Christian—and its occupation of additional Palestinian territory is now almost 50 years old. Whether American politicians have had self-serving or humanitarian motives, their policy, pushed by Israel's Jewish American lobby, has underwritten brutal injustice.

Thus U.S. intervention in the Middle East has made enemies for the American people, putting them at risk unnecessarily. This was blindingly clear on 9/11, the perpetrators of which cited America's alliance with Israel against the Palestinians among their grievances. Today we live with the threat (however exaggerated) that terrorism could again come to United States. This is a direct outcome of the American presence in a range of conflicts.

For this we may thank the largely unaccountable people who make foreign policy. We'd be safer without them.