1844: The Year That Remade America

Jesse Walker | From the April 2015 issue 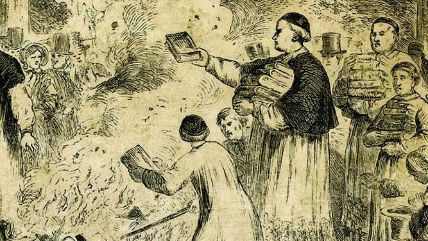 Few American elections were as pivotal as the one in 1844. When James K. Polk beat Martin Van Buren for the Democratic nomination, the party's libertarian-leaning anti-slavery wing had to take a back seat to the slaveholders and expansionists. (Four years later, Van Buren's faction would walk out altogether, forming the nucleus of the new Free Soil Party.) And when Polk defeated Henry Clay in November, the country was set on the road to seizing the Southwest—and to some key disputes in the lead-up to the Civil War.

John Bicknell's America 1844 (Chicago Review) is the riveting story of an eventful year, covering not just an election but nativist riots, pioneer journeys, and religious frenzies. Two spiritual movements play major roles: the Millerites, who expected Christ to return before the voting started, and the Mormons, who ran their own candidate. He didn't make it to November: A mob killed him, making the prophet Joseph Smith the first man assassinated on the White House trail.