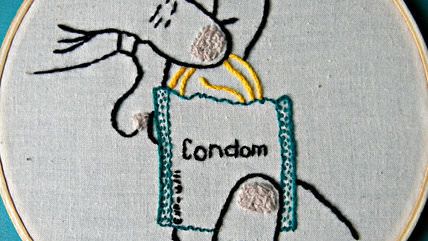 Under the proposed condom measure, which he wrote, "Weinstein would be placed in charge of monitoring any adult film produced in California to determine if condoms were used," Eros Media reports. "If a condom wasn't readily apparent in each scene, Weinstein would be deputized by the Attorney General to review the raw footage of the production, and file lawsuits against anyone involved in the production, including but not limited to the producers, distributors, agents, and anyone with a demonstrable 'financial interest' in the production."

The text of the proposed ballot measure states that "The People of the State of California, by enacting this Act, hereby declare that the proponent of this Act"—that would be Weinstein—"has a direct and personal stake in defending this act from constitutional or statutory challenges to the Act's validity." Should the Attorney General fail to adequately uphold its provisions, "the Act's proponent shall be entitled … to act as an agent of the citizens of the State of California." As such, Weinstein would be compensated by the state for "reasonable expenses and other losses." To remove Weinstein from this role would require a majority vote from both houses of the state Legislature.

Diane Duke, head of porn-industry trade group the Free Speech Coalition, noted to Eros that "Weinstein has waged a 10-year personal crusade against the adult industry and now wants tax payers [sic] to pay him to control it." To Duke, this is not just a waste of money but a slip back into old morality-based censorship under the guise of public health.

"For the first time in nearly forty years, we're looking at the government spending taxpayer dollars to censor adult film," she said

California's Legislative Analyst's Office predicted that should the measure become law, "parts of the adult film industry likely would respond by either relocating outside of California in order to avoid or protest the law's requirements or continuing to make adult films in California while seeking to evade state and local law enforcement." As a result, "tens of millions or hundreds of millions of dollars of annual economic activity and hundreds of full- and part-time adult film industry jobs likely would be eliminated from the California economy" or driven underground, it said. Ultimately, the measure would reduce annual state and local tax revenue "by millions or tens of millions of dollars per year" while costing "a few million dollars annually" to enforce.