Another Would-Be Critic of Libertarianism Takes on a Straw Man

How refreshing it would be for someone to set forth the strongest case for libertarianism before attempting to eviscerate it. 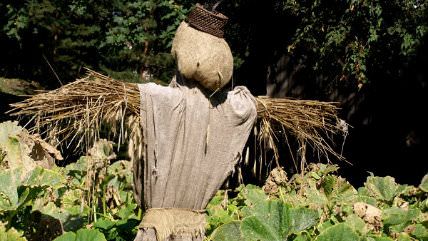 We must face the fact that criticism of the libertarian philosophy in the mass media will most likely misrepresent its target, making the commentary essentially worthless. That's painfully clear from what critics publish almost weekly on self-styled left-wing and progressive websites. How refreshing it would be for someone to set forth the strongest case for libertarianism before attempting to eviscerate it. Is the failure to do so a sign of fear that the philosophy is potentially appealing to a great many people?

The latest cheap shot is David Masciotra's piece at Alternet, '"You're Not The Boss of Me!' Why Libertarianism Is a Childish Sham." As the title indicates, the upshot of the piece is that only a child would wish not to be subject to the arbitrary will of others. Thus Masciotra has disguised a brief for authoritarianism as a plea for communitarianism.

Reading the article, I find it hard to believe that Masciotra consulted anything more than an essay or two by a high-school senior or perhaps a college freshman with no grasp whatsoever of the long, rich liberal tradition from which the modern libertarian philosophy is derived. In other words, our author makes no attempt to take on the strongest case for libertarianism. Instead, he does what so many of his allies do: take the easy way out, counting on his readers' confirmation bias to immunize him against skepticism. Masciotra quotes not one libertarian, though he gets in is the obligatory slam at the standard caricature of Ayn Rand—"the rebel queen of their icy kingdom, villifying [sic] empathy and solidarity"—as though she were the first and last word on libertarianism. He seems unaware that substantial libertarian critiques of Rand abound, not to mention that Rand's thought is more complex than he indicates. (And no, Mr. Masciotra, Scott Walker and Gordon Gekko are not libertarians; their views have no relevance to this political philosophy.)

So what does Masciotra have to say? Let's sample his "critique":

Libertarians believe they are real rebels, because they've politicized the protest of children who scream through tears, "You're not the boss of me." The rejection of all rules and regulations, and the belief that everyone should have the ability to do whatever they want, is not rebellion or dissent. It is infantile naïveté.

This is a typical misrepresentation: libertarians reject all rules and regulations; they demand the freedom to do "whatever they want." I wonder if Masciotra's failure to qualify "rules and regulations" with the word government is an innocent oversight. Or is he trying to sneak something by his uninitiated readers? Obviously, libertarians believe that each person's life, liberty, and justly acquired property should be respected as essentially inviolable. (Emergencies may create exceptions with respect to property.) Libertarians also advocate freedom of contract. All of that amounts to a web of rules and regulations that constrain the individual's conduct. When libertarians say the equivalent of "You're not the boss of me," they are saying that no one may properly threaten or use physical force to compel them do anything they have a demonstrable right to not do or compel them not to do anything that they have a demonstrable right to do.

Opposition to any conception of the public interest and common good, and the consistent rejection of any opportunity to organize communities in the interest of solidarity, is not only a vicious form of anti-politics, it is affirmation of America's most dominant and harmful dogmas.

If Masciotra had bothered to explore the multidisciplinary libertarian literature, he would have quickly learned how ridiculous this is. He seems ignorant of such luminaries in the history of (classical) liberalism as Adam Smith, Frédéric Bastiat, Thomas Hodgskin, Carl Menger, Herbert Spencer, Benjamin R. Tucker, Ludwig von Mises, and F. A. Hayek—not to mention contemporary left-libertarians such as Gary Chartier, Roderick Long, Kevin Carson, and Charles Johnson—because to read these thinkers is to realize that for serious liberals and libertarians, community and solidarity are indispensable to human flourishing. To conflate methodological and ethical individualism (specifically, eudaimonism) with atomistic individualism is to confess an unfamiliarity with the libertarianism. (For details, see my "Tackling Straw Men Is Easier than Critiquing Libertarianism.")

Radical libertarianism, especially its left-market-anarchist variety, is not anti-politics, broadly speaking. As Long writes in "Market Anarchism as Constitutionalism" (PDF):

…anarchy is the completion, not the negation, of the rule of law. Anarchy "comes not to destroy but to fulfil the law."

Libertarians favor an environment in which the widest variety of communities may freely be organized—but they believe that only voluntary communities are legitimate communities.

The disasters of reducing life, the governance of affairs, and the distribution of resources to such a shallow standard [viz., "how much money will it bring in?"] leaves wreckage where among the debris one can find human bodies.

I and the libertarians I know would agree. It's another gross caricature to hold that libertarians reduce all of life to money. Certainly the libertarians influenced by the Austrian school of economics would laugh at this notion. Money is desired only because it facilitates the achievement of one's objectives in life under conditions of scarcity, objectives that are necessarily embedded in social existence. That is, money is not an end but a means. It makes mutually beneficial exchange easier that it would be, and exchange is an important and desirable form of social cooperation.

Moreover, libertarians, and anyone else who appreciates how markets unimpeded by privilege work, understand that profit is a sign that producers have transformed scarce resources from a less useful form to a more useful form in the eyes of consumers. In other words, in freed markets, money returns signify and reward services rendered to others. (See my "Bastiat on the Socialization of Wealth" and "Monopoly and Aggression.") To the extent this is not true, we find corporatist privileges dispensed by the state.

Competitive individualism, and the perversion of personal responsibility to mean social irresponsibility, is what allows for America to limp behind the rest of the developed world in providing for the poor and creating social services for the general population.

People are harmed not by free competition, which benefits workers and consumers, but by competition-suppressing privileges bestowed on the ruling elite by the state. These include so-called intellectual property (patents and copyright), myriad burdens to self-employment and small-scale worker-owned enterprises (licensing, permitting, zoning, etc.), and more. Freed markets—void of all privilege—align personal and social responsibility though the libertarian nonaggression obligation. One would not be free to foul the air or water, for example, because other people's rights would be violated. As for providing for the poor, not only would there be fewer poor in a world without ruling-classes and state impediments to personal advancement, but short-run difficulties could be overcome through mutual-aid societies and labor organizations unencumbered by special-interest regulation and red tape. Government welfare programs are at best efforts to ameliorate ills the government itself causes. (For how freed markets achieve what state socialists say they want, see my "Free-Market Socialism.")

Who then are the libertarians rebelling against? The most powerful sector of the society is corporate America, and it profits and benefits most from the deregulatory and anti-tax measures libertarians champion. That sector of society also happens to own the federal government.

I can't disagree. But note that deregulation and (targeted) tax cutting are not the same as wholesale repeal of corporate privileges. Quite the contrary, deregulation often amounts to expanding previously granted privileges. The remedy here is not to maintain or increase regulation, but rather to eliminate the privileges. It is odd that this is lost on so-called progressives. Their reforms empower bureaucrats (further), when they should be liberating individuals. That's another kind of trickle-down process to be rejected.

Libertarians proclaim an anti-government position, but they are only opposing the last measures of protection that remain in place to prevent the government from full mutation into an aristocracy. By advocating for the removal of all social programs, libertarians are not rebelling, as much as they are reinforcing the prevailing ethos of "bootstrap" capitalism. The poor are responsible for their plight, and therefore deserve no sympathy or assistance.

The author's ignorance, again, is glaring. Had he taken on the strongest case made by libertarians (in my view, that's the left-libertarian case grounded in eudaimonism), he would know that 1) they oppose all aristocratic measures no matter how well established, 2) demand repeal of corporate privileges and subsidies before the repeal of programs for the least well-off, and 3) do not believe that poor people are generally responsible for their own plight. The least well-off deserve sympathy for being victims of the ruling class, but more than that, they deserve freedom from the ruling class and its executive committee, the state.

When children yell "you're not the boss of me" they believe they are launching a rebellion against the household establishment, but they are conforming to the codes of behavior visible among all children. Libertarians are attempting to practice the same political voodoo—transforming conformity into rebellion—without realizing that their cries for freedom coalesce with their childlike culture.

The essential matter is not conformity versus rebellion, but freedom versus aggression. If Masciotra sees the demand for freedom as childish, that says more about him than about libertarianism. Meek acceptance of authoritarianism is not a sign of maturity.

[Philosopher Charles] Taylor complicates the picture [of self-actualization in The Ethics of Authenticity] by adding the elemental truth of individuality and community that personal freedom is empty and meaningless without connections to "horizons of significance." That beautiful phrase captures the essentiality of developing bonds of empathy and ties of solidarity with people outside of one's own individual pursuits, and within a larger social context. Neighborhoods, religious institutions, political parties, advocacy organizations, charities, and social justice groups all qualify as "horizons of significance", and the connections that arise out of those horizons inevitably producs [sic] politics of communal ethics and public responsibility, in addition to private liberty.

The libertarians I have been citing would agree, except as anarchists we'd strike political parties off the list. Masciotra is still stuck on his caricature.

Defending and championing selfish indifference to collective interest and need conforms not only to the mainstream American practice of social neglect, but also to the most basic and brutish impulse of humanity's mammalian origins. The rebel searches for higher ground. The conformist crawls through the shallow end of the swamp.

By now, the reader can anticipate what I want to say, so I'll leave it at this: if Masciotra is concerned about the American practice of social neglect, he might ask why the corporatist Leviathan discharges social responsibility so deplorably, and how in its absence such responsibility would to fall on us directly as members of communities. In other words, government crowds out mutual aid and social cooperation —and does a rotten job to boot.

When will such critics finally understand that serious libertarians want to abolish aggression—especially the systemic aggression that defines the state—precisely so that we all may flourish by living fully human lives in fully human communities? This libertarianism is about self-actualization, peaceful social cooperation, mutual aid, and respect. If critics want to debunk libertarianism, they will have to debunk that.