It's a play fake that never fails. 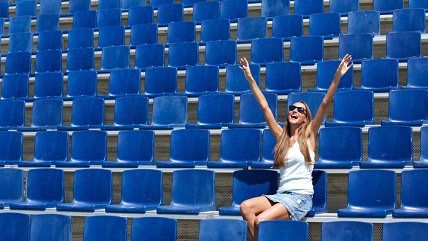 Since 1995, Los Angeles has been an anomaly: a huge city with lots of sports fans that has exactly as much professional football as Billings, Montana. This week, Angelenos got a bit of good news: They still aren't getting an NFL franchise.

A corporation called AEG announced Monday that it was giving up on its effort, endorsed by Mayor Eric Garcetti, to build a new football stadium as part of a renovated downtown convention center. So one of the groups vying to induce a team to move from some other city—St. Louis, Oakland, San Diego—is out.

This is good news because attracting a team would probably mean piling a burden on local taxpayers to enrich owners who are already wealthy. Local taxpayers would have been on the hook for $350 million in debt to finance the new arena, on top of the $322 million left to be paid on the current convention center. And taxpayers elsewhere would have been effectively sharing the load, because the bonds used to get the money would have been exempt from federal taxes.

But Southern Californians are not free of the threat of having to pay for a professional football team that most of them will never go to see. (When the Rams were still in Los Angeles, before decamping for Missouri, they had the worst attendance in the league.) Inglewood is planning a facility that would house an NFL franchise, and Carson is hoping to build an arena to be shared by two of them, the Chargers and the Raiders.

St. Louis and Missouri have countered by proposing to build the Rams a new stadium, which could involve $350 million in state bonds. You could almost forget that the Edward Jones Dome is just 20 years old and was built, with public help, to lure the team.

University of Chicago economist Allen Sanderson has a better idea: Pay the Rams to keep playing there. "It would be far preferable for the mayor of St. Louis to write a check to the Rams' owner for, say, $100 million and let it go at that, essentially a bribe to stay put and shut up," he told me.

This is a second-best option, he admits. He has a sensible preference that local governments and the feds provide no money at all. NFL teams are rich entities, and there is no reason their owners shouldn't pay for their own playgrounds.

No reason, that is, except that they can usually get cities to offer them money to come or stay. The Miami Marlins got public assistance in building a gaudy retractable-roof ballpark, most of whose costs were paid by local governments.

While the public was spending more, the Marlins' owners were spending less, slashing their team payroll by more than half. This year, it's the second-lowest in baseball.

The only justice is that the mayor responsible for the funding was removed from office in a recall election. His successor, who opposed the deal, has refused to attend a Marlins game.

But none of that makes taxpayers whole. So it's better if the federal government discourages such extravagance by not furnishing tax breaks. How many Americans would volunteer to help Dallas Cowboys owner Jerry Jones build a $1.2 billion stadium for the NFL team that ranks as most disliked by fans? Even most Texans probably wouldn't go for that.

But all of us are getting to do it whether we want to or not. Bloomberg Business reported in 2012, "Over the life of the $17 billion of exempt debt issued to build stadiums since 1986, the last of which matures in 2047, taxpayer subsidies to bondholders will total $4 billion."

The expense is always justified as an ingenious way to create jobs and prosperity. But economists Dennis Coates and Brad Humphreys surveyed the research on the impact of teams and stadiums on local economies and found "no substantial evidence of increased jobs, income or tax revenues."

Team owners, however, can always find some city or state willing to fleece taxpayers in the fallacious hope that prosperity will follow. It's a play fake that never fails.