Is It Really Plausible That Clinton Didn't Send a Single Classified Email During Her Time at State? 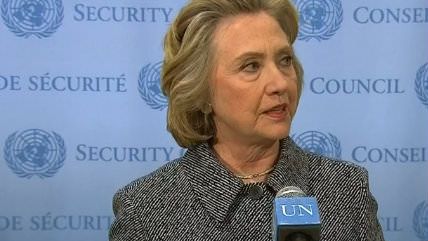 Is it really plausible that, as Hillary Clinton insisted in a press conference yesterday, that not one of the emails she sent through the email she used whil Secretary of State contained any classified information whatsoever?

Maybe not. According to The New York Times, several people who have some insight into the question are skeptical, if only because the government tends to err on the side of classifying more information as secret:

Relations with other countries are particularly subject to secrecy claims. "Foreign government information" — information received from another government with the expectation that it will be held in confidence — is an official category of classified information in secrecy regulations.

A former senior State Department official who served before the Obama administration said that while it was hard to be certain, it seemed unlikely that classified information could be kept out of the more than 30,000 emails that Mrs. Clinton's staff identified as involving government business.

"I would assume that more than 50 percent of what the secretary of state dealt with was classified," said the former official, who would speak only on the condition of anonymity because he did not want to seem ungracious to Mrs. Clinton. "Was every single email of the secretary of state completely unclassified? Maybe, but it's hard to imagine."

Steven Aftergood, who directs the Project on Government Secrecy at the Federation of American Scientists, said he suspected that if there had been no fuss and a researcher or journalist had sought all of Mrs. Clinton's emails under the Freedom of Information Act, the answer might have been different.

Clinton is in something of a bind here because she decided to run all of her email during her time at State through a single, personally controlled email account. But, according to the Times, "storing classified information in a personal, nongovernment email account on a private computer server, like the one at Mrs. Clinton's home, would be a violation of secrecy laws." So she more or less has to insist that there was zero classified information passed through the account. Add this to the list of reasons why her email-behavior excuses are weak.