Cody Wilson, Pioneer of Homemade 3D Printed Guns, Calls Out Another Company For Refusing to Do Business with Him

Offers $15,000 Bounty for Anyone Who Can Deliver Him a MarkForged carbon-fiber 3D Printer. 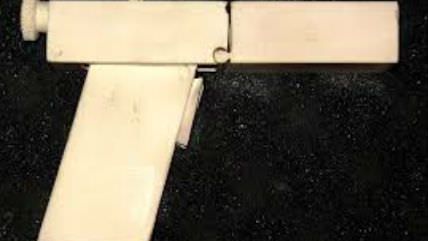 I reported last week about how FedEx refuses to help Cody Wilson ship his home CNC mill to make un-serial-numbered weapons at home, his "Ghost Gunner."

This morning he wages a new P.R. war front against MarkForged, for refusing to sell him a 3D printer using carbon fiber.

As Wired reported this morning:

Defense Distributed founder Cody Wilson says he pre-ordered the Mark One about a year ago for $8,000, but was told last Friday in a phone call with a MarkForged salesman that the company refuses to sell him one, citing terms of service that disallow private citizens from using the machine to make firearms. So instead, Wilson is offering what he describes as a "bounty" to anyone who can get him MarkForged's new carbon fiber printer.

"Anyone who's got access to one, any reseller, any individual or business or entity that can deliver it to me, I will give them fifteen grand," says Wilson, who has also released a YouTube video advertising his offer. "I'm going to get this printer. I'm going to make a gun with it. And I'm going to make sure everyone knows it was made with a MarkForged printer."

In a statement to WIRED, MarkForged cited terms of service that "limit experimentation with ordnance to the United States Government and its authorized contractors." In fact, the company's terms of service page doesn't include that statement. But it does reserve the right for the company to refuse sale to anyone, even after an order is placed.

A professional provocateur as well as armament-maker, it clearly amuses Wilson watching how so many elements of the world of "normal business" try to run far from any connection to his projects.

But he knows it doesn't matter in the end; their very refusal both highlights aspects of the world he wants to highlight, and doesn't ultimately stop him from his goals. As Wilson said to me in my extensive December 2013 profile of him:

There hasn't been a roadblock in his path that he didn't in some way foresee, and none of them have yet have set back his goals. "This has been a continuous process of different levels of authority figures trying to stop it from happening and thus allowing it to happen," he says. "Of course we are going to succeed-because you all are trying to stop me. That seemed natural and ended up being true."

Wilson video about his feud with MarkForged: