Investigations occasionally have followed in McAuliffe's wake like a slime trail. 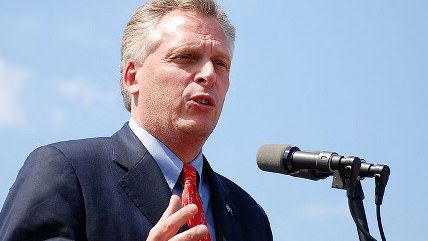 "Terry McAuliffe is very stern about ethics in Virginia," a reader notes. "How'd he get rich, anyway?"

Governor McAuliffe has indeed laid down the law—or tried to—regarding badly needed ethics reforms in the commonwealth. He has imposed a $100 gift cap on himself and his administration. Last year he canceled funding for a new ethics board that he considered a sham. He created an advisory commission chaired by two elder statesmen, Republican Bill Bolling and Democrat Rick Boucher, to propose new rules for the state's politicos. And he recently took the unprecedented step of partially reimbursing the state for the cost of his security detail when he took a personal trip abroad to visit a daughter in Africa.

A few days ago the governor chastised lawmakers for their recalcitrance regarding ethics reform. Lamenting the "many abuses" that have occurred over the years, he continued: "If you want to take free trips and get all kinds of benefits and goodies, well, public service is not where you should be. There are many things in life you can go do. You have made the decision to be in public service. It's not public service funded by private interests. I want to take a trip, I pay for it myself. It's the right thing to do."

This is all to the good. Still, it brings to mind St. Augustine, who wrote many fine words about sexual purity—after he had practiced so much sexual impurity it would have made a satyr blush.

McAuliffe hasn't always been exactly averse to mixing public service and private interests. He was, for example, the chief fundraiser for Bill Clinton's 1996 re-election bid—a role that, by definition, involved using funds from private interests in the pursuit of public service. That pursuit sometimes led to questionable situations, as a 1998 news report made clear:

"WASHINGTON—President Clinton's chief 1996 fund-raiser sought to steer big Democratic donors to Teamster President Ron Carey's re-election despite his sworn denials, two witnesses have told the Senate's investigation into campaign fund-raising abuses. Terence McAuliffe, who was treasurer of the Clinton-Gore '96 campaign, said in sworn Senate testimony that he had no active part in discussions about a contribution swap scheme that triggered a federal grand jury investigation of the 1996 Teamsters election."

That wasn't the only federal investigation in which McAuliffe's name came up. In 1998 the Labor Department subpoenaed "records from a union pension fund," as a news story reported, "as part of a criminal investigation into real estate deals between the fund and Terence R. McAuliffe." The pension fund "invested close to $50 million in McAuliffe's companies without requiring McAuliffe to put up any of his own money." McAuliffe eventually sold his interest in the company at a tidy profit.

Investigations occasionally have followed in McAuliffe's wake like a slime trail.

"Car Company With Ties to Terry McAuliffe Probed by SEC," read a Washington Post headline a couple of years ago. That would be GreenTech Automotive, the company McAuliffe departed (in late 2012) with none of the fanfare he employed when he was running it. GreenTech partnered with Gulf Coast Funds Management, run by Anthony Rodham—Hillary Clinton's brother. Gulf Coast sought to arrange investors for GreenTech through the federal EB-5 visa program, and drew the attention of yet another federal agency. As Politico reported, "A Virginia-based company that helped finance Terry McAuliffe's former auto manufacturing firm GreenTech has been identified as part of an investigation into a potentially problematic visa scheme" that raised hackles at the Department of Homeland Security.

McAuliffe was long gone by the time those stories broke. On the other hand, he seems to have had a hand in arranging meetings with immigration officials regarding EB-5. "Terry knew somebody in Biden's office, and that's how the meeting got coordinated," a GreenTech lawyer told The New York Times.

McAuliffe said he knew nothing about the investigations into GreenTech or Gulf Coast, or the questionable activities that instigated them. But then, he also claimed to know nothing about it last year when his political action committee suggested selling face-time with him for cash. For 10 grand, the proposal went, a donor could get in on roundtable discussions with the governor and policy experts. For 100 grand, a donor could enjoy a private dinner with the governor and his wife and participate in monthly policy talks with advisers.

When the news broke, the governor professed to be shocked and appalled—even though the PAC's director called the arrangement "nothing out of the ordinary." But how's a world-class fundraiser supposed to know that?

Maybe all of this is just a wild coincidence. Maybe McAuliffe just has amazingly bad luck when it comes to picking his associates. Or maybe he is something like St. Augustine, who spoke with authority derived from experience when he denounced sins of the flesh.

The difference, of course, is that Augustine didn't simply lecture others. He first confessed to having done wrong.