Does it live up to CNN's hype about domestic right-wing terror? You decide. 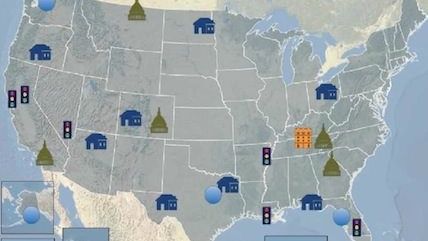 Reason has obtained the federal government's recent report on the sovereign citizens, a largely unorganized subculture whose elaborate legal theories say they do not have to follow most laws. Members of the movement are infamous for filing nuisance lawsuits, making their own drivers' licenses and license plates, and sometimes attempting to form their own parallel institutions of government. Some of them are also prone to violence, and it is this hotheaded subgroup that is the subject of the report.

The intelligence assessment, which the Department of Homeland Security (DHS) prepared in coordination with the Federal Bureau of Investigation, was circulated to law enforcement on February 5 but was not released to the public. (DHS did not respond to repeated requests from Reason for comment.) CNN revealed its existence last Friday, but the network quoted only a couple of lines from it and did not post the full document for everyone to see.

We've posted it here. If you've seen the sensationalized coverage the sovereign citizens have been getting in some quarters—CNN announced its find with the front-page headline "Bigger threat than ISIS?"—the report's rather measured contents might surprise you.

The document declares on its first page that most sovereign citizens are nonviolent, and that it will focus only on the violent fringe within a fringe—the people it calls "sovereign citizen extremists," or SCEs. It describes their violence as "sporadic," and it does not expect its rate to rise, predicting instead that the violence will stay "at the same sporadic level" in 2015. The author or authors add that most of the violence consists of "unplanned, reactive" clashes with police officers, not preplanned attacks.

When sovereigns do plan an attack in advance, the report suggests that this tends to be "in direct response to an ongoing personal grievance, such as an arrest or court order." It argues that sovereign citizens are unlikely to pick a symbolic target—like, say, the Murrah Building in Oklahoma City—and that in this way they are distinct from the killers who attacked two randomly selected cops in Las Vegas last year or three TSA officers at an L.A. airport the year before that. While some police assessments of the movement may give officers the impression that anyone asserting their rights or videotaping an encounter might be a sovereign citizen, the DHS report draws its distinctions fairly carefully.

The report also includes an interactive map of 24 cases from 2010 to 2014 in which sovereign citizens planned, threatened, or actively engaged in violence. A static version of the map is below; to see the interactive version, click here.

There is some variety in these events, from threatening letters to murder plots. But the incidents typically involve a traffic stop or another police encounter gone bad, and they frequently end with the sovereign citizen dead. (In two of the 24 cases, the sovereigns succeeded in killing people.) The incidents do not come substantially more or less frequently over the course of the half-decade covered—though I should note that the report does not claim its list is exhaustive, and that I've seen other lists that include incidents the federal report leaves out and vice versa. (In part, that reflects different definitions of who qualifies as a sovereign citizen.) I'd therefore be wary about using this data to judge whether these little eruptions are becoming more common.

In short, the DHS report presents sovereign-citizen violence as a fairly rare risk that officers should nonetheless be prepared for should it arise. It does not claim that the threat to police is growing, it does not conflate the sovereigns with other anti-government groups, it makes no broad claims about terror on the right (the word "right-wing" appears nowhere in the document), and it does not compare the sovereigns to ISIS or to any other foreign terrorists.

So where did CNN get the headline "Bigger threat than ISIS?" By also citing a completely separate study published last July, in which the National Consortium for the Study of Terrorism and Responses to Terrorism surveyed state and local police. The cops ranked sovereign citizens as America's most serious terror threat, with Islamists coming in second. The survey did not ask specifically about ISIS, and it's unlikely that the group was on many officers' minds: The poll took place in late 2013 and early 2014, before the Islamic State started to dominate the headlines. (The results may also reflect the fact that the police are the group by far most likely to be affected by SCE violence.)

Below the jump, you'll find the 24 incidents listed in the Homeland Security report, as described in that document and in media coverage. (In some cases there are disputes over the facts; the list presents the incidents as the police see them.)

• May 2010: Jerry and Joseph Kane get into a shootout with the police after a traffic stop. They kill two officers and are themselves killed.

• June 2010: A sovereign citizen begins a multi-year series of written and verbal threats against law enforcement officials in Sweetgrass, Montana.

• September 2010: Victor Dwayne White of West Odessa, Texas, shoots and wounds two sheriff's deputies and a utility worker who came onto his property to access an oil well. A 22-hour standoff ensues.

• January 2011: David Russell Myrland is arrested after threatening to use "deadly force" if necessary to "arrest" the mayor of Kirkland, Washington, and other officials.

• March 2011: Francis Shaeffer Cox conspires with confederates to kill a judge and an IRS officer in Anchorage, Alaska.

• June 2011: A domestic disturbance call brings police to the home of William Foust in Page, Arizona; Foust is shot and killed in the ensuing altercation.

• November 2011: A property dispute brings the authorites to Rodney Brossart's home in Lakota, South Dakota. He threatens to shoot the officers, and a stand-off follows.

• August 2012: In LaPlace, Louisiana, a traffic stop leads to two shootouts with members of a small sovereign-citizen group headed by Terry Lyn Smith, one at the vehicle and the second at a trailer park. Two police officers are killed and three wounded.

• September 2012: Phillip Monroe Ballard attempts to solicit the murder of the judge presiding over his tax trial.

• March 2013: Jeffrey Allen Wright of Navarre, Florida, threatens officers with a gun when they try to serve a warrant. He is shot and killed.

• June 2013: In Snellville, Georgia, a man sends police a letter threatening death if they interfere with members of a sovereign-citizen group called the "Embassy of Granville."

• June 2013: Lewis Pollard points a gun at officers at his Fruita, Colorado, residence. He is shot and killed.

• July 2013: Eric Stanberry Jr. pulls a gun on a security guard outside a Nashville strip club, identifying himself as a "sovereign peace officer." Police tase him.

• July 2013: An incarcerated sovereign citizen plans to kill a federal agent and a witness.

• July 2013: David John McCormick refuses to let the Coast Guard board his boat. After lunging at one of the crew, he is arrested for assaulting a federal officer.

• March 2014: Israel Rondon of Middleburg Heights, Ohio, fires at deputies serving a warrant. He is killed.

• June 2014: When deputies try to serve an eviction notice on Earl Carlson Harris of Ashland, Oregon, he threatens them with a rifle and is killed.

• June 2014: On federal land in Nevada County, California, Brent Douglas Cole allegedly fires at employees of the Bureau of Land Management and the California Highway Patrol as they attempt to tow vehicles from Cole's unsanctioned campground.

(* This bullet point has been updated to add the sovereign citizen's name and to clarify the incidents' locations.)