Why is there no Uber for prostitution? 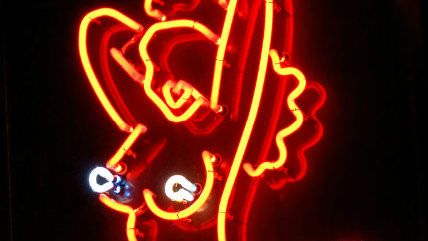 Adam Ozimek of Modeled Behavior asks: Why is there no Uber for prostitution? "Customers could receive ratings, so could prostitutes, and payments could be done in a safer way that does not involve cash," he writes. The short answer to why this doesn't exist, of course, is because prostitution remains illegal in most of the United States, as does promoting or aiding prostitution—a designation that could ensnare anyone inclined to launch or run an Uber-like sex-trade app.

In a new Iowa Law Review article, "Prostitution 3.0," University of Colorado law professor Scott Peppet explores the issue in more depth, laying out the myriad benefits of a "technology-enabled sex market" as well as the legal barriers that "inhibit prostitution-related innovation" in America. First, the benefits of better apps and screening tools:

It could help prostitutes by deterring "no shows" and non-paying customers. It could reduce illegal trafficking and coerced prostitution by screening prostitutes for age and legal status, and by using biometric identification to confirm that the prostitute the client hired online was in fact the same individual who appeared in person. It could enable and encourage prostitutes and clients to find and engage each other off the streets and out of view. It could preserve anonymity for both prostitutes and customers, allowing them to avoid social stigma and maintain privacy. It could be conducted by a private (perhaps non-profit) firm, not the government, greatly reducing the risk to either party that the state might in some way exploit the information provided.

All of this has created a Catch-22, writes Peppet, wherein the legal climate prevents innovation that could make the industry safer and more socially acceptable, and then this danger and stigma is used to justify continued prohibition. Peppet suggests incremental legal reform, including repealing various state laws that criminalize ancillary prostitution activities and tightening existing laws that shield third-party communication platforms.

The argument for such incremental technological innovation and legal reform is grounded in our basic commitment to freedom of contract in a liberal society. As a society, we have long been committed to the ideal that contracting parties are best positioned to arrange their affairs and that judicial intervention into those affairs is generally unwarranted absent market failure or other concerns. … To respect our commitment to preserving liberty to the extent possible, we should remove legal barriers to such innovation.

Unfortunately, Peppet's ultimate vision here is "legalizing Prostitution 3.0 while criminalizing the purchase of sex outside of Prostitution 3.0's parameters"—which seems far from the lofty liberalism and freedom-of-contract ideas Peppet pays lip service to. If we continue with the Uber analogy, Peppet's system would remove legal constraints on ride-sharing apps while making hailing or driving a cab illegal. It's a vision that seems predicated on a strange sort of techno-utopian statism, and a disappointing one for those of us who believe prostitution problems stem from black markets and state interference.

In a nice response article published in Iowa Law Review, Scott Cunningham and Todd D. Kendall argue similarly, writing that "most of the social problems associated with prostitution are not inherent to the industry, but they are the logical result of the prohibition itself, a conclusion supported by the fact that other, similar, markets not subject to a prohibition experience few of the problems associated with prostitution."

"The proper conclusion to be drawn from the fact that violence, exploitation, and robbery still exist in the market is not that we need more or different types of technology ("prostitution 3.0″), but instead it simply reflects that the de facto legalization associated with [the shift from street to online prostitution] was only a partial, limited legalization, not a full de jure legalization," Cunningham and Kendall continue. And any proposal "that would exempt from prosecution particular types of prostitution-facilitating technology, while proscribing others, presumes too much foresight into the future development of the prostitution market, and too much wisdom on the part of lawmakers and industry regulators."