Support for abortion policies in the United States is at its lowest level since 2001. 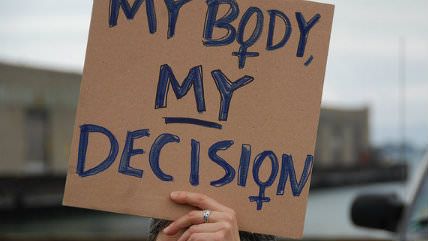 Support for abortion policies in the United States is at its lowest level since 2001, according to new polling data from Gallup. Only 34 percent of respondents said they're satisfied with "the nation's policies regarding the abortion issue" in Gallup's latest "Mood of the Nation" survey, conducted in early January 2015.

Of those dissatisfied with abortion laws, more were concerned that laws didn't restrict abortion enough than had a problem with abortion laws being too strict. Overall, 24 percent said they wanted stricter laws, while 12 percent wanted less strict laws.

Since 2011, state passage of abortion restrictions has skyrocketed, with more restritions passed in 2011 though 2013 than in the entire previous decade. The majority of these laws have been what are known as "TRAP" (Targeted Regulation of Abortion Providers) laws, which impose stricter regulations on abortion doctors and clinics than are imposed on other medical providers. Though these laws are often pushed as adding extra layers of protection for women, there's no evidence these layers are necessary. Instead, the laws have been remarkably good at shutting down abortion clinics entirely, with nearly half of Texas clinics forced to close since 2013 (and most of those remaining open in legal limbo), all but three clinics closing in Alabama, and all but one in Mississippi.

Yet other states have recently seen high-profile pushes for abortion restrictions flop. In the 2014 midterm elections, personhood measures failed in Colorado and North Dakota, and a Tennessee amendment that passed is being contested. Federal courts recently ruled against all or parts of anti-abortion laws in North Carolina, Indiana, Texas, Louisiana, Alabama, and Mississippi, and the U.S. Supreme Court blocked part of a Texas TRAP law. And at the federal level, anti-abortion legislation (outside anti-federal funding measures) has repeatedly failed. It's easy to see why those opposed to abortion access might have been feeling frustrated this January.

When broken down by party affiliation, the Gallup poll found increased dissatisfaction with abortion policies was largely coming from Republicans, whose disapproval jumped from an average of 50 percent between 2002-2008 to an average of 62 percent between 2012-2015. Of these dissatisfied conservative respondents, most wanted stricter laws (38 percent then, 43 percent now), a slightly growing percent wanted less strict laws (then 5 percent, 7 percent now), and a puzzling third group are dissatisfied but want the laws to remain the same (then 7 percent, now 12 percent).