Some see the Supreme Court tipping its hand by declining stays of rulings. 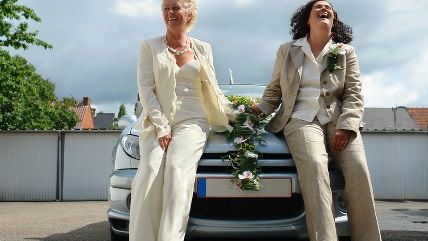 This morning the Supreme Court declined to stay a ruling requiring Alabama to recognize same-sex marriage. Damon Root wrote about Supreme Court Justice Clarence Thomas' dissent this morning, accusing the majority of taking a "cavalier attitude towards the States" by declining a stay. The Supreme Court also previously denied a stay from Florida as well in similar circumstances. Since Root blogged this morning, Alabama has started handing out marriage licenses to same-sex couples.

Thomas also said in his dissent that the court's refusal to grant a stay may be "a signal of the Court's intended resolution" of the gay marriage recognition cases that are coming before the Supreme Court in the spring. That is to say, the refusal to grant a stay is the Supreme Court giving a not-very-subtle hint that the days are numbered for state-level bans on same-sex marriage.

[C]ertainly, the vote count isn't clear from the Alabama and Florida rulings allowing gay marriages to go forward, even though Thomas and Scalia were the only ones to write dissents. The court does not release its votes when it rules on so-called stay applications, so the votes of other justices remain unknown.

But make no mistake: If the justices thought there was a good chance they would rule against same-sex marriage in the upcoming cases involving Michigan, Ohio, Kentucky and Tennessee, they likely would stop couples from marrying elsewhere.

Chris Geidner at BuzzFeed, the go-to guy for legal reporting on gay and lesbian issues, is of a similar mind:

Given Thomas' dissent today, the only real question left outstanding is where Chief Justice John Roberts and Justice Samuel Alito will end up on the ultimate question. Although both dissented in the Windsor DOMA decision, neither has joined Thomas and Scalia in saying publicly that they would have granted any of the recent stay requests.

Orin Kerr over at The Volokh Conspiracy (via The Washington Post) also thinks today's decision is also a strong indicator and sees very little uncertainty in stating the Supreme Court is likely to strike down gay marriage bans come June. Ed Whelan at the National Review also notes the likely meaning, though he's far from pleased about it: "Who needs briefing or oral argument anyway, when you're just making it up?"

We will have to wait to be sure, though. I generally agree with the predictions. I have a hard time imagining a group of justices as generally careful as the Supreme Court allowing state-level gay marriage bans to be lifted, thereby requiring states to license the relationships and start accommodating them in all the many legal issues that come from marriage contracts, only to turn around and then declare the bans legal.