A blast of techo-utopianism from 1929 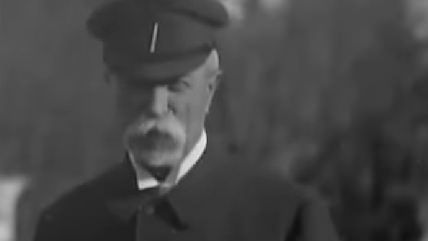 In this raw footage for a newsreel in 1929, Czechoslovak President T.G. Masaryk praises American innovation and ingenuity. Along the way—starting at 1:22—he offers some thoughts about the utopia to come once television is perfected:

I sometimes fancy a much greater invention: to see and hear in the distance without any wire. Just imagine. You could observe from your place—say, in the sitting room—the jungles of Africa, what the wild beasts are doing there. And more, you could see and listen to the jungles of our human society. Every man then would be forced to be honest, and there would be no more secret plotting anymore, of all the wickedness. Wonderful, no?

Wait. Is he talking about television, or is he predicting universal surveillance? Or is it both—an early glimmer of the pending day when reality TV and the NSA finally converge? (I'm reminded of the great silent-era science-fiction movie L'Inhumaine, which envisioned a sort of television where the performer views her audience instead of the other way around, changing channels to watch one fan after another.)

If you want to see the whole thing—which also features Godardian edits, a horseback-riding interlude, and a military band—here you go: