AG Nominee Loretta Lynch Says Civil Asset Forfeiture 'Protections Are There.' Not When Her Office Ignores Them.

Long Island business had nearly half a million seized for more than two years without any court filing. 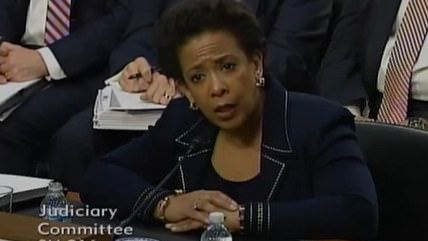 U.S. Attorney Loretta Lynch, nominated to replace Eric Holder as attorney general, sat before the Senate's Judiciary Committee to be asked questions (or sit through speeches from senators only vaguely approaching the concept of a question) about President Barack Obama's use of executive authority on immigration, waterboarding, prosecuting terrorists, marijuana legalization, Operation Chokepoint, gay marriage recognition, and a number of other issues. The hearings and speeches continue today.

Lynch responded that "civil and criminal forfeiture are very important tools of the Department of Justice as well as our state and local counterparts." Speaking directly about civil asset forfeiture, she claimed that such forfeiture is "done pursuant to supervision by a court, it is done pursuant to court order, and I believe the protections are there."

That would come as news to the three brothers of the Hirsch family in Long Island. In 2012, they saw $447,000 of their assets seized by the IRS and the Department of Justice over an allegation that their business Bi-County Distributors, which delivers snack foods to convenience stores, was deliberately depositing cash deposits in amounts smaller than $10,000 in order to avoid IRS reporting requirements.

It was Lynch's office who handled this seizure and Lynch's office who kept the company's money for more than two years without ever setting a court date for the business to attempt to get its money back, nor was anybody in the family ever charged with any crime. The asset-forfeiture-fighting lawyers of the Institute for Justice (IJ) took on the Hirsch family's case, and just earlier this very month, Lynch's office agreed to give them their money back.

So, needless to say, Larry Salzman, the IJ attorney who represented the Hirsch family, did not agree with Lynch's statement that targets of DOJ asset forfeiture have necessary protections.

"Her office in particular seized money under the civil forfeiture laws and held it for more than two and a half years without filing any sort of complaint in court," Salzman says, "without any hearing before a judge. That's the raw facts."

Salzman also points out that it wasn't until IJ sued to force the federal government into court before anything happened, at which point Lynch's office agreed to give the money back.

Salzman says Lynch's office just ignored the Civil Asset Forfeiture Reform Act of 2000, which mandates deadlines for the DOJ to make its case for seizing property, or claimed it did not apply.

"In the Bi-County Case, prosecutors made an end run over even basic procedures," Salzman says.

Nevertheless, conventional wisdom is that Lynch is likely to sail through the nomination process just fine. We will have to pin our hopes on congressional reform of asset forfeiture policies.

Watch Lee's two sets of exchanges with Lynch below. And read Jacob Sullum's explanation of how little impact the recently announced DOJ asset forfeiture reforms will actually have here.