A Few Perspectives on Political Correctness

In honor of Jonathan Chait 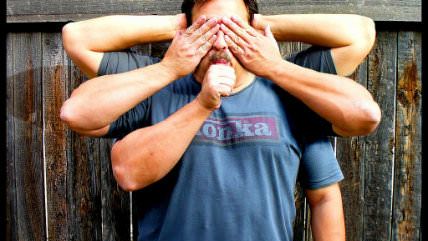 Earlier this week, Jonathan Chait set a lot of the Internet alight with a piece on "political correctness." Much of Chait's piece will be well-worn territory to regular Reason readers, covering various recent, high-profile instances of the tyranny of tolerance run amok.

Aside from finding Chait's tone (as always) minorly annoying and his distinctions—between "liberals" and "leftists," between silencing and criticism—somewhat confused, I didn't see much in the piece that would provoke outrage beyond the perpetually outraged. Ha! Maybe the perpetually outraged club is a lot bigger than I think, or maybe it's just that Chait's reputation precedes him, but the Commerical and Internet Left were swift to excoriate Chait's piece. Some, like Vox's Amanda Taub, went so far as to insist that "political correctness doesn't exist."

If you haven't already encountered the Chait backlash, I wouldn't bother looking for it. But some of the backlash to the backlash is pretty damn great. First up: Cato analyst (and ex-Reason staffer) Julian Sanchez, who tackles some of the mockery Chait received from folks who read his essay as nothing but "an angsty white man opus." While Chait may indeed come across whiny or a little clueless, "discursive norms that lead to substantive self-censorship" aren't simply a matter of "some precious snowflake's project of expressive self-realization (being) constrained," Sanchez writes.

Imagine an argument where someone invokes a spurious or unfair accusation of (let's say) racism or sexism as a cudgel to close down a conversation. Maybe many other members of the accuser's ideological in-group ("allies") themselves perceive it as unfair, but life is short and people are busy—what's the incentive to chime in and say "hey, wait a minute"? Pretty weak even in the absence of negative feedback. And as anyone who's watched these arguments play out is well aware, questioning whether such a claim is fair or reasonable in a particular instance is going to be read by some observers as denying that sexism or racism are problems at all. … You end up having to explain and justify yourself to all these folks whose good opinion you care about, and who needs the hassle?

Iterated over time, though, that means the people who do object in particular cases are increasingly from out-groups: People who really don't care about racism or sexism or think they're serious problems.  Now the incentives are even worse for in-group members. Because now being the one to say "hey, wait a minute" in a particular instance doesn't just mean conflict with an ally, it means associating yourself with those assholes.  Increasingly the objections are coming from people who just don't care about the good opinion of the in-group, many of whom are expressing those objections in actively racist or sexist terms.  So now anyone voicing reservations has to do all sorts of throat clearing (I did it instinctively at the start of this post) to avoid the ever more statistically reasonable heuristic inference that any pushback is coming from those repulsive quarters. If you're the only ally pushing back, hey, maybe you're not an ally at all, but secretly one of those assholes.

You end up with team "x is the problem" and team "x is not a problem," and ever fewer people prepared to say "x is a problem, but maybe not the most useful lens through which to view this particular disagreement." When teetotalers are the only ones willing to say "maybe you've had one too many," because your friends are worried about sounding like abstemious scolds, the advice is a lot easier to dismiss. Which is fine until it's time to drive home.

Next up: blogger Freddie de Boer, who has long voiced similar concerns as Julian's from his perch on the left. As an instructor at Purdue University in Indiana, he sees this phenomenon first-hand all the time:

I have seen, with my own two eyes, a 19 year old white woman — smart, well-meaning, passionate — literally run crying from a classroom because she was so ruthlessly brow-beaten for using the word "disabled." Not repeatedly. Not with malice. Not because of privilege. She used the word once and was excoriated for it. She never came back. I watched that happen.

I have seen, with my own two eyes, a 20 year old black man, a track athlete who tried to fit organizing meetings around classes and his ridiculous practice schedule (for which he received a scholarship worth a quarter of tuition), be told not to return to those meetings because he said he thought there were such a thing as innate gender differences. He wasn't a homophobe, or transphobic, or a misogynist. It turns out that 20 year olds from rural South Carolina aren't born with an innate understanding of the intersectionality playbook. But those were the terms deployed against him, those and worse. So that was it; he was gone.

(…) These things aren't hypothetical. This isn't some thought experiment. This is where I live, where I have lived. These and many, many more depressing stories of good people pushed out and marginalized in left-wing circles because they didn't use the proper set of social and class signals to satisfy the world of intersectional politics. So you'll forgive me when I roll my eyes at the army of media liberals, stuffed into their narrow enclaves, responding to Chait by insisting that there is no problem here and that anyone who says there is should be considered the enemy.

Which brings us, lastly, to David Sessions, writing in In These Times. There are quite a few things in Sessions' piece I disagree with, but I think he makes an important point: Chait is wrong in portraying this sort of excessive political correctness as a flaw of "the radical left," whom Chait contrasts with good old-fashioned "liberals" like himself.

Sessions and de Boer are both what one might call radical leftists. It is not them and their ilk committing the sins of social-justice warriorism. The radical/socialist/Marxist (pick your label) voices on the American left right now are the most likely to be railing against the sort of performative politics Chait decries, which they see as a barrier to actually affecting structural change. As de Boer put it on Twitter yesterday, "Chait … thinks "PC" politics is a matter of extremity, like Adolph Reed and Suey Park are the same person. But "the 'Marxist left' gets into constant, destructive fights with the people Chait critiques. Those aren't the same groups."

Why does this matter? Because if we hope to mitigate this prevailing political aesthetic, it probably helps to diagnose it correctly. Chastising the "radical left" (or "radical feminists") for this sort of thing only muddies things up. It is very much mainstream liberalism, or at least one branch of it, taking up the p.c. mantle these days.

Similarly, I think it's a mistake to read this nouveau-p.c. cult as coming from academia. Sure, it shows up there frequently, but where are 18-year-olds taking their cultural cues from? It's not professors but media and online culture. As Sessions suggests, "the misguided excesses of the Social Media Left" are in very large part a product of "the dynamics of the Internet." In part, this means the way Twitter and Facebook incentivize certain sorts of attitudes and actions (in the vein Sanchez mentioned above). And in part, it's a product of the fact that "identity-based outrage is now one of the most reliable sources of clicks and Facebook shares" for the mainstream press.

A large part of online outrage politics is performative—and I'm convinced that most of the journalists engaging in it know it. But, hey, they have to eat. And they can justify the theatrics to themselves because, really, it's for a good cause, right? When there is so much racism and sexism in the world still, what's a little hyperbolic sensitivity going to hurt?

Sanchez and de Boer do a good job laying out exactly how it can hurt the very causes it's ostensibly aimed at rectifying—by making cultural tolerance appear ridiculous or intimidating, by creating epistemic closure, by turning off many people who would otherwise be supportive. I also worry about the college students who are taking their cues from Guardian columns and Gawker posts and Twitter timelines. Do they realize how much it's all driven by economics, not ideology? Can one generation's political aesthetics become the next one's deep-seated political conviction?