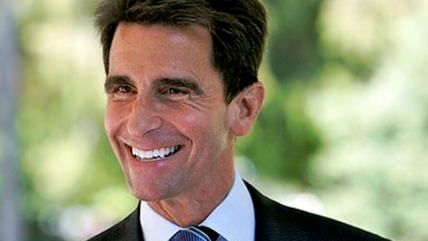 Yesterday a California legislator introduced a bill that would add electronic cigarettes to that state's Smoke-Free Workplace Law, thereby prohibiting vaping everywhere that smoking is prohibited, including offices, bars, restaurants, stores, schools, and hospitals. "No tobacco product should be exempt from California's smoke-free laws simply because it's sold in a modern or trendy disguise," declared Sen. Mark Leno (D-San Francisco).

Since e-cigarette are not tobacco products, that explanation is puzzling. Furthermore, since e-cigarettes do not generate smoke, it is odd to ban vaping in the name of maintaining smoke-free workplaces.

The depth of Leno's confusion is further revealed in an interview with Reuters. "Whether you get people hooked on e-cigarettes or regular cigarettes, it's nicotine addiction and it kills," he told the news service. "We're going to see hundreds of thousands of family members and friends die from e-cigarette use, just like we did from traditional tobacco use."

Leaving aside the question of exactly how dangerous secondhand smoke is (and the question of who should determine smoking rules on private property), there is no evidence that the vapor from e-cigarettes poses a significant threat to bystanders. While some of the chemicals in tobacco smoke have been detected in e-cigarette vapor, the levels are much lower. A 2013 study reported in Tobacco Control, for example, found that "the levels of potentially toxic compounds in e-cigarette vapour are 9–450-fold lower than those in the smoke from conventional cigarettes, and in many cases comparable with the trace amounts present in pharmaceutical preparations [of nicotine]."

Tellingly, the strongest evidence Leno can cite in favor of his vaping ban is a recent study that "found high levels of formaldehyde, a known carcinogen, in e-cigarette vapor." But as I explained last week, that finding came from a test in which a vaporizer was overheated to a point where no human would be interested in using it. When operated at a realistic temperature, the vaporizer emitted no formaldehyde. Kimberly Amazeen, vice president for public policy and advocacy at the California chapter of the American Lung Association, implicitly concedes the lack of evidence to support a vaping ban, saying, "There is currently no scientific evidence establishing the safety of e-cigarettes." Shouldn't the burden of proof be on the prohibitionists?

Contrary to what Leno seems to think, it's not the nicotine in cigarettes that kills people; it is all of the toxins and carcinogens generated by tobacco combustion. Since vaping does not involve tobacco or combustion, it is much less dangerous than smoking. Hence the policy Leno is pushing will actually undermine public health to the extent that it discourages smokers from switching.