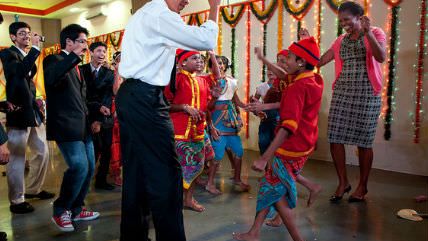 to India basically for the Republic Day parade on Monday and see the Taj Mahal.

But I note in The Week that Obama is arriving at a very troubling moment when the forces of militant Hindu nationalism – emboldened by the presence of one of their own, Narendra Modi, in the prime minister's office – are rearing their ugly head again. Among other things, they are forcing/inducing Muslims and Christians to "reconvert" to Hinduism and going after so-called "love jihad, an alleged conspiracy by Muslim men to seduce Hindu women and convert them. Yet Modi, who still has to wash away the stains of Muslim bloodletting on his watch, has said not a word against any of this. To the contrary, in fact.

Obama wants a climate change deal with India like the one he got with China. "But fighting global warming in exchange for tolerating religious persecution is hardly a good trade off," I note. "He can't ignore the political forces he'll be aiding and abetting in India."

So what should he do? To find out, click here.