WATCH: No Asylum—Immigrants Locked Up in U.S. after Fleeing Violence 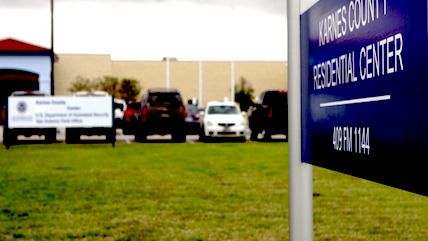 When people knock on your door, and they are fleeing abuse, the United States is obligated morally and legally to let them in," says Virginia Raymond, an immigration attorney fighting for the right of a single mother and her three daughters to seek asylum in the U.S. after fleeing gang violence in El Salvador.

Watch the Reason TV video above for a glimpse at who exactly is being held in detention centers at record rates. The video profiles Marquez and her three daughters, who came to the U.S. from El Salvador after facing violent threats and extortion from gang members. While Maria and her family were seeking asylum from a dangerous gang that operates unchecked by an incompetent and often corrupt government, they almost immediately found themselves locked up in a family detention center in the small Texas town of Karnes, where they've spent the past six months fighting to avoid deportation.