Restate of the Union 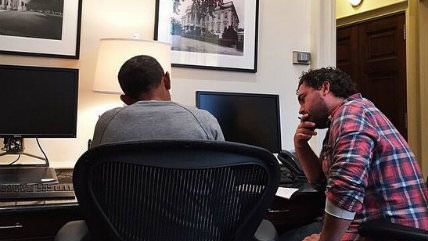 President Obama sure is consistent. His State of the Union address sounded like his other speeches: What I've done is great! America is in a much better position. We've created a manufacturing sector that's adding jobs. More oil is produced at home. I cut deficits in half!

Give me a break. The deficit is lower now not because of any prudence on Obama's part but merely because the $800 billion stimulus spending blowout didn't continue. All the president does is increase spending: free community college, free Obamaphones, free birth control, etc. Yes, our annual deficit is lower, but it's still $488 billion! Our $18 trillion national debt increases by $3 million every minute!

Yes, more oil is produced at home, but that's in spite of the administration. Oil production is down on public land.

Does the President delude himself when he takes credit for oil production, lower deficits, etc.? Or does he mislead on purpose? I don't know. Recently he bragged, "I created the lowest unemployment rate in years." He created it? He must know it's "low" only compared to the 10 percent reached during the recession—and because millions have simply given up looking for work. This recovery is the slowest in 70 years.

If Obama gave the State of the Union address I'd like to hear, he'd say this:

I heard you, voters, in November when you took control of the Senate away from my party. I get it. I overreached. I was arrogant. I imposed Obamacare on a nation that was deeply divided about it. I ruled through executive orders instead of legislation. I threw money at "green" nonsense. I'll give up the payments to the "green energy" industry if the Republicans stop coddling defense contractors.

I've been in government for years now. I know how badly it works. The last thing I should try to do is make it bigger. In fact, with Republicans now in control of Congress, it's time I worked with them to shrink government. If we shrink it, we might even dig our way out of the debt hole we're in. Heck, if we just slow the growth of government to 2 percent a year, we'd be in better shape.

But I didn't even try to accomplish that. I pretended taxing the rich would solve our financial problems. But there aren't enough rich people to tax. I got drunk on the idea of promising voters "free" stuff such as low down-payment mortgages and guaranteed paid family leave. I told them that all good things come from government. That's nonsense.

We should put an end to all bailouts. Businesses that screw up should accept the consequences, just like ordinary people who spend recklessly. Main Street should never again be forced to rescue Wall Street.

Instead of expanding government control of health care, we should phase it out. That includes Medicare. I know Medicare is popular, but it is unsustainable. Let current retirees receive their benefits as promised, but younger people should pay for their own health care.

People criticize the economic distortion created by welfare, but Medicare and Social Security are almost as bad. Both redistribute money away from the young and struggling toward those of us who have had decades to invest and save up.

To make these challenges a little easier to deal with, let's make America richer by abolishing most regulations. They strangle opportunity.

The more I think about it, the more Congress and I could transform America for the better just by getting out of America's way. The state of our union will be truly strong if the state—by which I mean government—is strictly limited.