President Carter was the last national chief executive to spare us the speech from the throne. 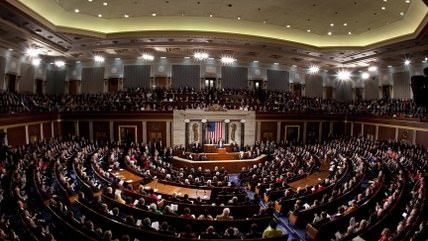 Former President Jimmy Carter is a tad underrated. Yes, the 1970s were a bit embarrassing all around, But Carter's administration helped deliver a healthy dose of deregulation to an economy that was state-controlled in weird and intrusive ways that many of us have forgotten. President Carter was also the last national chief executive to spare us the speech from the throne fucking tedious monarchical haranguing, as Thomas Jefferson might possibly have put it when he let his wig down. Yes, Jimmy Carter was the last president to mail it in, sending a written State of the Union address to Congress in 1981.

It's true, the annual "event" of presidents using a roomful of bored legislators to hog television time and pump themselves up before a national audience isn't as traditional as often assumed. But we're stuck with it for the moment. There's not even any surprise left to what presidents say. President Obama leaked his policy proposals/talking points for the base in advance, and critics started delivering "prebuttals" days ago. Which is no surprise, considering that the State of the Union address has nothing to do with updating us on the state of the union. It is, and has been for a long time, political posturing by an officeholder we've known for years, spurring responses by other players we've suffered for an equivalent amount of time.

But it's my job to watch this professional wrestling match, and I have an unhealthy fascination with the whole sick spectacle. You have no excuse.

Still, if you must watch, please stick with Reason. We'll be livetweeting this culmination of American democracy, and giving it the treatment it so richly deserves.