Is this really the best you've got, warmongers? 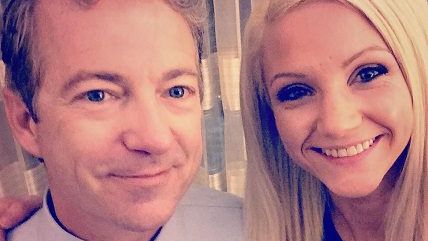 That's not news to anyone here; it's not news to anyone, anywhere, in fact. And yet The Free Beacon has dedicated 700 words to the cause of chronicling one Paul campaign blogger's very ordinary libertarian views. Here's how the The WFB headlines its piece on Marianne Copenhaver (a.k.a. "Libertarian Girl"), who was hired part-time to do social media work for Paul:

Gotta love that update. As if Copenhaver's support for Edward Snowden wasn't damning enough, she also hates the Pledge of Allegiance. Whose side is she on, anyway—ours or the terrorists'?

As far as outrage-peddling goes, the Copenhaver story is an embarrassment—for The Free Beacon. Is this really the best you've got, warmongers?

Alana Goodman is getting lazy if she couldn't find anyone crazier to be her token libertarian surrender monkey. Copenhaver's support for Snowden's activities, mild criticism of Israeli policy, and opposition to forced displays of nationalism might be objectionable to the hard right, but they are extremely common among libertarian-leaning young people who see Paul as the Republican who best typifies their views. What's more, Copenahaver didn't articulate these views in a remotely treasonous way. Beloved Rep. Justin Amash's criticisms of John McCain are bolder than hers, for goodness sake.

Pretty much every politician has some kooky supporters lurking in the shadows, waiting to be exposed by opposition researchers. Copenhaver isn't even one of them. The only thing newsworthy about this hit piece is its mundanity.