Justices take up cases from four states where same-sex marriage recognition bans have been upheld. 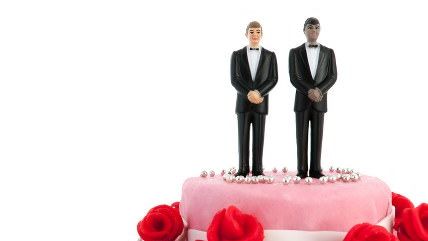 Today they decided they will indeed take up gay marriage again. In fact, they're going to hear four cases. From BuzzFeed:

The Supreme Court announced on Friday that it will take up four cases challenging state bans on same-sex couples' marriages — a long anticipated move that could lead to nationwide marriage equality.

The cases ask the justices whether bans on same-sex couples' marriages violate the Constitution's due process and equal protection guarantees.

The coming showdown before the justices over same-sex couples' marriage rights has quickly become seen as inevitable following the Nov. 6, 2014, decision of the 6th Circuit Court of Appeals to uphold the bans in Kentucky, Michigan, Ohio, and Tennessee. The ruling set up a disagreement with other appeals courts to have considered the issue; the 4th Circuit, 7th Circuit, 9th Circuit, and 10th Circuit courts of appeals all have struck down such bans on various grounds.

Arguments will likely take place toward the end of April, and we can expect a ruling in June.

This may be the case that settles gay marriage recognition as a legal matter once and for all, depending on how the justices rule. The spate of pro-gay marriage rulings over the past year is based on other federal judges interpreting the wording of the Supreme Court's ruling in United States v. Windsor. That ruling struck down part of the federal Defense of Marriage Act, but only in the sense that it required the federal government to also recognize a gay marriage in states that already legally recognize gay marriage. It did not require states to legally recognize gay marriages. Nevertheless, the wording of the majority decision left several federal judges with the impression that the majority felt as though the state bans violate the 14th Amendment and have been ruling as such.

So this ruling could impact not just the four states but any state where a federal judge has relied on this interpretation or any state that still has a ban. If the justices rule that state level bans are unconstitutional, the bans on these four states (and any that are left) will go away. If they turn around and say that all those federal judges overstepped by pushing United States v. Windsor forward, a lot of gains from 2014 will be threatened. The states that took the federalism route and legalized gay marriage recognition their own way, like Massachusetts or Maine, would probably be unaffected either way.