Will Petraeus Get the Snowden Treatment?

The evils of the Espionage Act 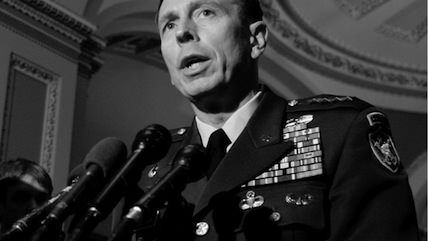 In a surprising development, the New York Times reported late Friday that the FBI and Justice Department have recommended felony charges against ex-CIA director David Petraeus for leaking classified information to his former biographer and mistress Paula Broadwell. While the Times does not specify, the most likely law prosecutors would charge Petraeus under is the same as Edward Snowden and many other leakers: the 1917 Espionage Act….

Petraeus' powerful D.C. friends and allies are about to be shocked to find out how seriously unjust the Espionage Act is—a fact that has been all too real for many low-level whistleblowers for years.

By all accounts, Petraeus's leak caused no damage to US national security. "So why is he being charged," his powerful friends will surely ask. Well, that does not matter under the Espionage Act. Even if your leak caused no national security damage at all, you can still be charged, and you can't argue otherwise as a defense at trial. If that sounds like it can't be true, ask former State Department official Stephen Kim, who is now serving a prison sentence for leaking to Fox News reporter James Rosen. The judge in his case ruled that prosecutors did not have to prove his leak harmed national security in order to be found guilty.

It doesn't matter what Petraeus's motive for leaking was either. While most felonies require mens rea (an intentional state of mind) for a crime to have occurred, under the Espionage Act this is not required. It doesn't matter that Petraeus is not an actual spy. It also doesn't matter if Petraeus leaked the information by accident, or whether he leaked it to better inform the public, or even whether he leaked it to stop a terrorist attack. It's still technically a crime, and his motive for leaking cannot be brought up at trial as a defense.

This may seem grossly unfair (and it is!), but remember, as prosecutors themselves apparently have been arguing in private about Petraeus's case: "lower-ranking officials had been prosecuted for far less."

One fierce advocate of prosecuting whistleblowers—Sen. Dianne Feinstein—is already calling for mercy in the Patraeus case. I suspect you're not shocked to hear it.

For more on the Leak Scare, go here.