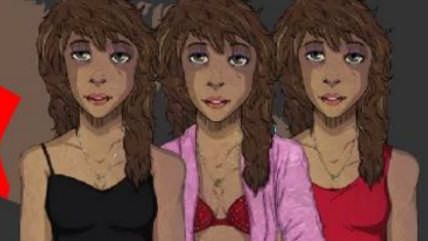 First, choose your city: Toronto, Vancouver, or Montréal. Next, decide whether avatar Andrea (Andréa, if you chose Montreal) will work on the streets, in a massage parlor, or as an escort. Then try to get screwed literally without being figuratively fucked by the cops—an ultimately no-win situation when it comes to The Oldest Game. Developed by a team of Canadian academics, the project is meant to highlight how the country's new prostitution law, C-36, makes life more difficult and dangerous for Canadian sex workers.

Through various encounters with clients, colleagues and law enforcement in three difference Canadian cities, players will experience how the legislation changes the way sex workers live and work, and play through the additional challenges sex workers will face when trying to remain safe.

Sandra Gabriele, a Concordia communications professor and one of the project's co-leads, is interested in using games as a form of journalism. She told The Globe and Mail:

"I approach this as an academic. So my question is: How well do news games succeed in helping us understand stories beyond the two-sided debate in typical journalism? We wanted to see if we could devise a game that explored the systems and point to the complexity of the situation, with the hope that people would then better understand exactly what's at stake."

Gabriele … first began considering the news game format when she read Ian Bogost, Simon Ferrari and Bobby Schweizer's book Newsgames: Journalism at Play. "The argument they make is basically: games are really good at demonstrating how systems work, so in order to be a good player, you have to understand what all the factors are that you're trying to balance," she says.

"So I just kind of got the idea. It was right around when the Bedford challenge was being launched and I thought to myself, isn't this a great example of a place where understanding how certain systems work together, like the legal system, like policing in individual communities, like poverty and debt, lead to certain kinds of choices that sex workers are often forced to make."

Gabriele and Concordia journalism professor Lisa Lynch partnered with a team of students studying video game design and development, as well as student writers and researchers. Sex worker Marilyne Hudon served as a consultant. The team plans to make the game available for free online play this February.

In Decemeber, frequent Reason contributor Noah Berlatsky explored how the long-time feminist divide over sex work has spilled over into the world of video games. Well-known feminist video critic Anita Sarkeesian "often focuses on the way games treat sex workers," but her video critiques "have not garnered much praise from those most directly affected"; "many sex workers have argued that Sarkeesian's videos contribute to the objectification and stigma that she claims she is trying to reduce" and "tell her, repeatedly, that her videos fail to represent them." From Berlatsky:

Much of the criticism of Sarkeesian has centered around her terminology. She doesn't call sex workers "sex workers." Instead she refers to them throughout her video series as "prostituted women." That's a term often used by writers who see all sex work as automatically exploitative or harmful to women, and by those who want to criminalize sex work. Sex workers have repeatedly tried to ask Sarkeesian on social media to reconsider her language, but she hasn't responded, and has continued to use the term. For example, in this recent tweet she says that fans of Grand Theft Auto have been harassing her by sending her images of "gameplay of the use & murder of prostitutes." The fact that gamers are using images of sex workers to harass Sarkeesian seems like it fits into her analysis—violence against sex workers is deployed in a misogynist way, in order to harass and intimidate a woman. But at the same time, Sarkeesian, by referring to the "use" of sex workers, seems to buy into the same logic, treating sex workers as things or utilities, rather than as human beings. (Sarkeesian did not respond to a request to comment for this article.)

I haven't seen or played The Oldest Game yet, so I can't say how well it lives up to creators' goals of portraying sex work realities and not negating sex workers' agency. But the way the developers talk and write about the project is encouraging. "With the goal of paying bills, the game normalizes sex work by stressing that, just like any other type of worker, sex workers are striving to meet their financial needs," state The Oldest Game's creators.

When a player must constantly risk being arrested, hurt or killed, the implications of the three laws at stake cannot be brushed aside. A player experiences these laws' consequences, rather than simply reading about them.